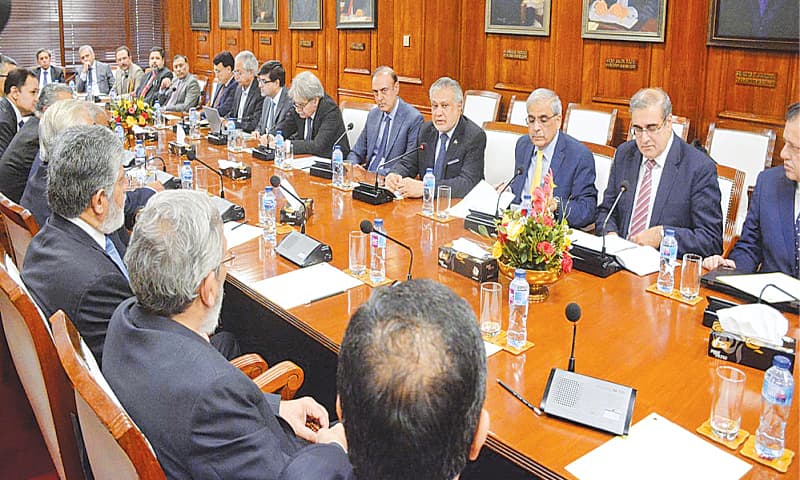 Ishaq Dar, the finance minister, emphasised that the fair value of the rupee “is 180-200 to a dollar” and threatened to take harsh measures against those who hoard, smuggle, and manipulate US dollars and keep the rupee low. While presiding over meetings with the presidents and CEOs of commercial banks and representatives of exchange businesses at the State Bank of Pakistan (SBP) on Saturday, he elucidated on the action plan of his government.

Bank of America The meetings were co-chaired by Governor Jameel Ahmed. Participants in the meeting told The Express Tribune that Tariq Bajwa, the special adviser on finance to the prime minister, was also there. The goal was to support the strengthening rupee while addressing the dollar deficit in the markets, particularly in the open market where small traders arrange import payments. Since the US terminated its two-decade-long war in August 2021, according to Forex Association of Pakistan (FAP) President Malik Bostan, Afghanistan has become a significant economic burden for Pakistan. He claimed Afghanistan is taking $2 billion every month out of Pakistan’s foreign exchange reserves, which is depleting the country’s supply of foreign currency. On Saturday, a dollar was selling for Rs 235-237 in Afghanistan as opposed to Rs222.47 in Pakistan’s interbank market.

He continued, “This is encouraging the smuggling of foreign funds into Afghanistan.” A meeting participant cited Dar as saying that Pakistan’s government would start a crackdown on the illegal Hawala and Hundi operators and bring the rupee to its fair value at roughly 180–200 “in a matter of weeks and days.”Despite receiving a loan of $1.5 billion from the Asian Development Bank (ADB) earlier in the week, the local currency lost 1.25% (or Rs2.47) in the previous three straight working days and closed Friday’s interbank trading at Rs222.47 versus the US dollar. The Real Effective Exchange Rate (REER), which measures the value of the rupee against a basket of currencies of Pakistan’s trading partners, increased to “108 yesterday,” according to Tresmark, a treasury consultancy business (Friday). This indicates that the rupee is already overvalued.

For developing economies like Pakistan, the appreciation of REER above 100 is detrimental. In free economies, the current account deficit may increase when REER is over 100 since it makes imports less expensive and exports more expensive. Up until Dar’s return as the minister of finance in September 2022, the central bank had largely maintained REER at around 96–97. About five years ago, when Dar was still in office, REER was above 120 due to his efforts to defend the rupee against the dollar. According to Bostan, $2 billion “goes to Afghanistan in the form of official and illegal trade, abuse of Afghan transit trade, and smuggling of currency and items via borders,” according to Bostan.

He noted that compared to reserves of $20 billion in August 2021, Pakistan’s foreign exchange reserves had decreased to $7.5 billion (without the $1.5 billion ADB loan). Dar warned that whoever was found to be involved in hoarding foreign currencies and manipulating the value of the rupee would face stern action from the government while serving as the SBP’s meeting chair. Dar directed commercial banks and currency dealers to play their proper roles in increasing the supply of US dollars in the inter-bank and open markets. In order to conduct business properly, Zafar Paracha, the secretary general of the Exchange Companies Association of Pakistan (ECAP), suggested during the conference that the government set up financial connections with neighbours like Afghanistan and Iran.