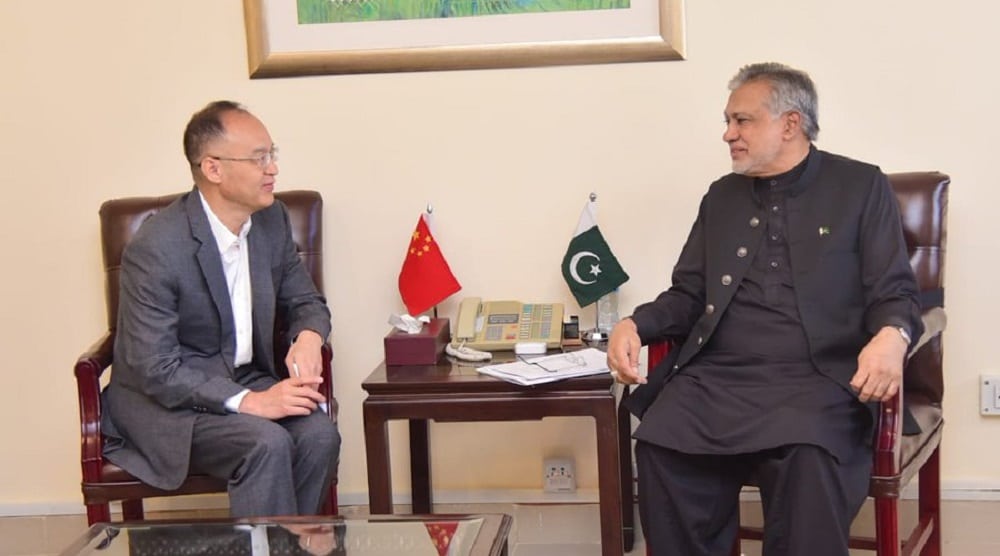 ISLAMABAD: Senator Mohammad Ishaq Dar, federal minister for finance and revenue, met with Donald Blome, the US ambassador to Pakistan, and Nong Rong, the ambassador of the People’s Republic of China, on Friday.

The Finance Ministry said Senator Mohammad Ishaq Dar, the federal minister for finance and revenue, had a visit from US Ambassador to Pakistan Donald Blome.

The event’s Finance Minister, Senator Ishaq Dar, welcomed the US Ambassador and emphasised that Pakistan and the US have had a long history of mutually beneficial cooperation.

The Finance Minister informed the US Ambassador of Pakistan’s expected losses as a result of the recent, catastrophic flooding.

Regarding the bilateral ties between Pakistan and the United States of America, Donald Blome shared similar views. He also spoke about his recent trip to Pakistan’s flood-affected districts and expressed his sorrow over the massive losses brought on by the flooding. He also informed the Finance Minister of the US government’s additional flood relief aid being provided to Pakistan at this critical moment.

The Finance Minister expressed his gratitude to the US for helping with flood relief and noted that Pakistan has always received US assistance when it needed it.

In addition, he stated that the current administration intends to strengthen trade, investment, and economic ties between the two nations.

Donald Blome was thanked by the finance minister for helping Pakistan.

Senator Ishaq Dar, the federal minister of finance and revenue, received a visit from the People’s Republic of China’s ambassador, Nong Rong, at the finance division.

Ishaq Dar, Pakistan’s Finance Minister, welcomed the Chinese Ambassador and emphasised the cordial and extensive historical relations between his country and China.

The Finance Minister expressed his sincere gratitude to the Chinese government for helping Pakistan during this period of catastrophic flooding. In the meeting, the most recent flood losses were also covered.

Both parties also discussed how to expedite CPEC’s development and exchanged opinions on how to further strengthen their nations’ ties of brotherhood. It was also mentioned that CPEC is a crucial project and that completing it on time is essential if one wants to enjoy the rich rewards.

In concluding remarks, the Finance Minister thanked Chinese Ambassador Nong Rong for continuous support and cooperation being offered by the government of China.