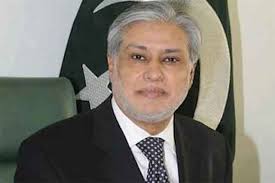 Beijing: Pakistan welcomes the Asian Infrastructure Investment Bank”s (AIIB”s) strong policies on governance, accountability, financial, and social framework and its ideals of “lean, clean and green,” bank. Finance Minister Ishaq Dar expressed these views adding that his country hoped to see the bank focus on the mega projects in areas of infrastructure, energy and transport as top priority.

He was addressing the meeting of the AIIB Board of Governors in Beijing.

He hoped AIIB would act as a catalyst of change and impart a salutary effect in reducing the poverty in the region, providing employment opportunities, and raising income and business prospects. Finance Minister Ishaq Dar also appreciated the Chinese top leadership for its continued support and congratulated the elected Chairman, Board of Governors, Vice Chairmen and President Jin of the Asian Infrastructure Investment Bank (AIIB) and all the nominated Directors. “The operationalization of AIIB is historic and shows that our joint efforts to forge a “Community of Shared Destiny” are bearing fruit,” he said.

During the meeting, Ishaq Dar congratulated Lou Jiwei on behalf of the people and government of Pakistan led by Prime Minister Nawaz Sharif on the successful take off of the China-led AIIB.

The Minister also congratulated Lou Jiwei on being elected as the first Chairman of the AIIB Council.

He said that operationalization of AIIB was historic. AIIB, together with other multilateral development institutions, would not only accelerate the inclusive growth of Asian countries” economies but will also support the global economic recovery.

Finance Minister Ishaq Dar expressed the hope that the economic and financial cooperation between the two sides would further deepen and usher in an era of progress, prosperity and development for both the countries.

Minister Ishaq Dar said that China-Pakistan Economic Corridor was a mega project of great significance particularly for Pakistan and China and generally for the region. He described it as a model of win-win cooperation people in Pakistan would hope to see soon the expected gains from implementation of sustainable development projects of energy and infrastructure. Both the Ministers also discussed the global economic situation. Lou Jiwei expressed gratitude to his counterpart for continued support and cooperation.