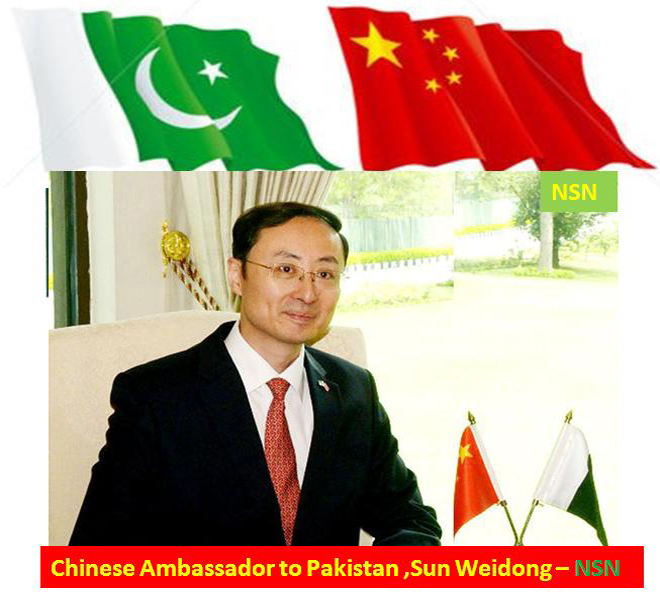 Islamabad: Pakistan: Chinese Ambassador to Pakistan Sun Weidong on Monday said that his government was encouraging its entrepreneurs to invest in Pakistan and as a result China’s direct investment in Pakistan has reached to $3.6 billion.

“This direct investment is the highest in South Asia and this trend will remain upward in the years to come,” he said while addressing opening session of Pak-China Business Opportunities Conference here.

He said the implementation process of China-Pakistan Economic Corridor (CPEC) was going on smoothly as it enjoyed the support and backing of the people.

The Ambassador said his country was ready to extend all possible cooperation to its iron brother, bringing the economic ties to a new height.

He said the friendship between the two countries was deep-rooted and their resources were complimentary to each other.

He said there had been considerable increase in volume of trade between the two countries in the recent years, while China’s direct investment in Pakistan was also showing upward trend.

The Ambassador said the CPEC had given new impetus to the economic ties of both the countries.

Terming the CPEC an important and pilot project, he said it was gradually entering a full implementation phase.

This initiative would benefit both the countries as well as the region, he added.

He said that Pakistan had emerged China’s largest investment destination in South Asia.

He recalled that the 2015 was the milestone year in their economic interaction.

He referred to the visit of Chinese President Xi Jinping and said that it had opened a new chapter of their relationship.

Series of social and economic activities took place in the recent year, which brought them more closer, he added.

He said the year 2016 would be the year of exchange programmes during which the bilateral cooperation would be taken to new heights.

He said there was a landmark achievement in economic and trade relations between the two nations.

Sun Weidong said that China and Pakistan had become the largest trading partner as their trade during January to November last year was $17 billion.

He said the visiting Chinese entrepreneurs would be able to explore business and investment opportunities during their stay in Pakistan.

The Ambassador also invited the Pakistani businessmen to take benefit of business opportunities in China.

He said entrepreneurs were backbone of China-Pakistan friendship. He hoped that entrepreneurs would strive for innovations and exploring investment opportunities in different fields.

He expressed the confidence that this conference would play an important role in increasing Pak-China partnership. APP