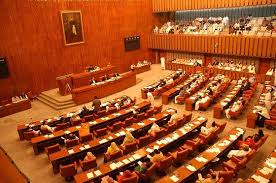 Islamabad: The Senate Special Committee on China-Pakistan Economic Corridor (CPEC) has showed serious reservations over the secretive behavior of the government regarding CPEC Western route and alleged the authorities were still hiding details of the project.

There was no progress on any of the 78 CPEC projects in Balochistan, the Balochistan Minster for Labour and Manpower said, while briefing the Senate Special Committee on China-Pakistan Economic Corridor. He affirmed the provincial government was ready for cooperation, but the federal government was delaying the project.

The committee which met with its convener, Senator Taj Haider, in the chair, urged Prime Minister Nawaz Sharif to summon a meeting to remove the apprehensions on the corridor once and for all. The committee members expressed utter dissatisfaction over the answers given by the government representatives to the queries they raised.

The senators asked questions about different sections of the agreed routes, specification of these sections compared with specific sections being built on the Eastern route and completion of agreed routes along with the railway routes. The committee members expressed reservations over the CPEC projects and contended the government was hiding some project details. It was pointed out by the senators that expensive independent power producers (IPPs) whose cost was the highest in the entire world were being installed.

A senator from Balochistan claimed that work on Gwadar airport was not started due to irregularity in the purchase of land. However, the Planning and Development secretary said the issues had been resolved and the work on the airport would start soon.

Senator Siraj-ul-Haq proposed, “We need a joint committee along with four chief ministers to understand the consequences and issues of CPEC. All MOUs and JCC (Joint Coordination Committee) minutes should be submitted to the Senate and the National Assembly so that all misunderstandings and conflicts are eliminated.”

He contended all the four provincial chief ministers, including representatives from Gilgit-Baltistan must be a part of the joint committee to allay reservations being expressed even today.

Senator Farhatullah Babar said the JCC was formed on August 13, 2013. All parties’ conference under the prime minster accepted suggestions of the political parties, so it was duty of JCC to follow and implement the decision of the APC. He regretted the issue was still contentious and was being raised inside and outside the Parliament.

Babar called for steps to allay apprehensions of the provinces and warned that persistent controversies could be counter-productive.

Senator Attique Sheikh of MQM asked the Planning and Development secretary who was dealing with all these projects and sought information about loans and interest rate thereon.

He also asked whether the Chinese government would pay tax to Pakistan after the completion of CPEC. In response to a question, the planning and development secretary said it was duty of the water and power and finance ministries to share this information with the committee. Both the ministries were directed to attend next meeting of the special committee.

The members of the committee said it was the 5th meeting and everyone felt that lack of communication, ignorance and lack of knowledge was pulling the important project backward and the government was also giving irresponsible feedback.

They proposed it was now necessary to call a meeting with the prime minster to discuss the ongoing issues to which NHA, Planning and Development and other ministries concerned must be invited.

The senators said Balochistan had a serious water crisis and people were found even stealing water. In response to the senators’ views and suggestions, Taj Haider said a report would be furnished and presented to the house on the issue soon.

The senators also suggested that an oil refinery should be built in Balochistan. In response to this, the Planning and Development secretary said it was a fine observation and would be taken up in the ministry.

The railway secretary also briefed the committee on its projects, M1, M2 and M-3, through which Gwadar would be connected to Havelian in Khyber Pakhtunkhwa. He said the railway routes had to be upgraded and it would help in connectivity for trade between China and Pakistan.