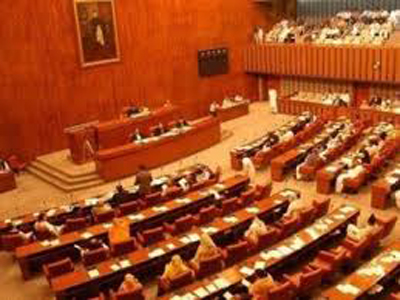 Islamabad: The Senate was informed on Thursday that tender for first phase of the western route under China-Pakistan Economic Corridor (CPEC) would be opened on Monday next.

The Senate was informed 147 projects costing 2114 billion rupees have been approved by the present government.

Replying to questions, Minister of State for Parliamentary Affairs Sheikh Aftab Ahmad told the House that funds have been allocated for the western route.

To another question, he said CPEC transport sector projects are covered in Transport Monographic Study and Orange Line is not included in the study. He pointed out that agreement on Orange Line Project was signed on the occasion of Chinese President’s visit to Pakistan. He said this project is totally financed by the Punjab Government and they have made all the arrangements for its financing. He clarified that no federal government resources are involved in the project.

To a question, he said 147 projects costing 2114 billion rupees have been approved by the present government that are being financed under PSDP of current financial year. These relate to energy, water, transport, communication and physical planning and housing sectors.

Replying questions on behalf of Finance Minister, Minister for Climate Change Zahid Hamid said a resurvey of beneficiaries of Benazir Income Support Programme is likely to begin in June this year to determine their eligibility or otherwise.

He said about 199 billion rupees have been distributed in the last two and a half years across the country under BISP.

To another question, he said FBR has introduced a number of measures to determine exact number of tax payers and to bring them into tax-net. A national data warehouse has been created to collect data through third party sources like motor vehicle registering authorities, educational institutions, Capital Value Tax collected by FBR and provincial government on purchase of property, electricity distribution companies, automobile companies, insurance companies and withholding tax statements.

The Minister for Industries Ghulam Murtaza Jatoi informed the House that a proposal has been submitted to federal cabinet for revival of subsidy on sugar sold through utility stores. He pointed out that sale of subsidized sugar also helped increase overall sale and profit of the corporation.

The House adopted a report of the special committee to monitor the implementation of Gas Infrastructure Development Cess Bill, 2015.

He said no one has the power to waive off a payable tax. He said industry which collected the cess will have to pay.

The House will now meet at 10:30 tomorrow morning.