Those trying to create instability in country will never succeed: PM 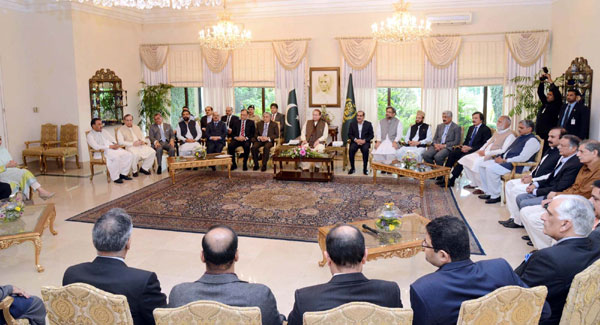 Islamabad: Prime Minister Muhammad Nawaz Sharif Thursday said those trying to create instability in the country and hinder the path of progress and development would never succeed.

Chairing a special meeting of federal ministers, advisors and special assistants here at the Prime Minister House, he said, “With God’s grace our hands are clean. We have faced ruthless accountability in the past too, with success.”

“The nation is focussed on economic progress and prosperity of the country and will not let anyone create any obstacle in the way,” the Prime Minister said.

He said his opponents believed that if his government completed its constitutional term, they would be left far behind. The Pakistan of today, he said, was far better than the one, three years back and the whole world acknowledged it.

“We have always favoured values over power, and always took decisions in consultation with other parties,” he told the cabinet members.

Prime Minister Nawaz Sharif vowed, “The journey to bring the country out of a shattered economy, darkness and ills in various sectors will continue with same vigour and zeal.”

He said the entire international community vouched the transparency in the measures taken for the restoration of the economy, ongoing development, mega power and infrastructure projects and China Pakistan Economic Corridor (CPEC).

“We completed many a projects at half the cost of what were the projected estimates as our objective is clear to take the country out of the quagmire of problems, confronting it for the past many years, and leaving it way behind other nations.”

The Prime Minister said that by 2018 the country would have enough electricity to get rid of power loadshedding.

He said when his government took over, the economy was at its lowest ebb and investors were fleeing the country.

“Today we have restored the confidence of the people and the graph reflecting hopes and aspirations of the people in their future has gone up for the first time in 15 years.”

He said today power was being supplied to the industries without any break, the supply of gas had improved and the foreign exchange reserves had doubled.

Speaking about China Pakistan Economic Corridor, the Prime Minister said it was a guarantor of bright future for Pakistan. China came to help the country at a time when Pakistani financial institutions were not in a position to fund such mega projects.

He mentioned the Thar Coal Project, which he said, had the raw material to produce electricity for the next 400 years.

The Prime Minister also thanked his cabinet colleagues and the entire nation for praying for his health. He also shared with them about his ailment and treatment.

During the meeting, the cabinet members said certain political elements were trying to benefit from the current situation as their objective was to divert attention away from the government’s economic agenda and create political uncertainity.

The cabinet members said the ongoing propaganda was not aimed against the person of the prime minister or his family, but it was actually against the political stability and pace of development of the country. These elements were trying to sabotage country’s development and progress, they added.

They said all economic indicators were positive and the entire global community spoke of transparency in the projects.

The federal ministers said the Prime Minister was the symbol of the federation and vowed to work even harder under his dynamic leadership to counter terrorism and puruse his strong economic vision.

The ministers belonging to the coalition partners also extended their complete support to the Prime Minister on behalf of their leadership and political parties.