Rest in peace SAARC: The tug of war between India and Pakistan 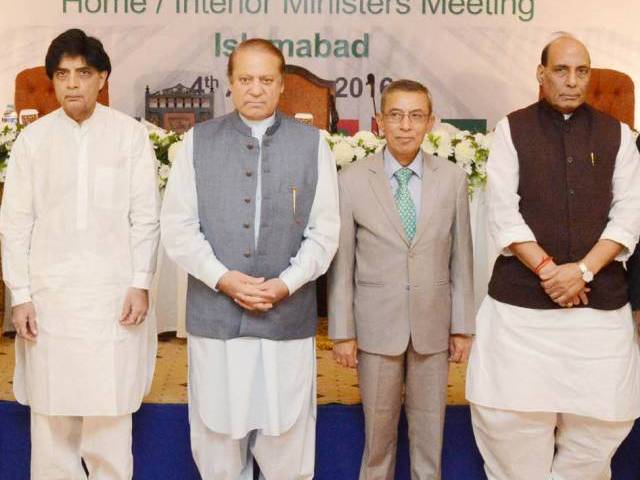 Newspapers published yesterday were filled with stories on the recent exchange of harsh words between the interior ministers of both India and Pakistan. The aftermath of which resulted in the Indian dignitary neither attending the lunch hosted by Prime Minister (PM) Nawaz Sharif nor staying overnight as planned.

It all started on Thursday, when Interior Minister Chaudhry Nisar Ali Khan was receiving his counterparts as the chair of South Asian Association for Regional Cooperation’s (SAARC) meeting. The Indian Home Minister Rajnath Singh did not even properly shake hands with his host. For both nuclear-armed rivals and neighbours, the 19th SAARC ministerial meeting became a pretext to vent their anger. The summit fell prey to India’s desire to brand Kashmir’s freedom struggle as terrorism while alleging Pakistan to be a terror sponsor.

From Delhi’s perspective, Prime Minister’s tribute to Burhan Wani for his ultimate sacrifice was offensive. “Terrorists should not be glorified as martyrs. There is no good or bad terrorism. Terrorism is terrorism,” said Singh in his speech. Khan duly responded back while relinquishing the chairman’s seat, even though the two were not scheduled for a one-on-one summit. “We also need to look at the genesis of terrorism, and resolution of unresolved disputes is the only way ahead to address these deep fissures that have evolved over decades,” said Khan. “I need not mention the whole incident because the essence of multilateralism should be respected here,” he added. But none of the ministers from other SAARC member-states were surprised. The organisation has remained hostage to India-Pakistan rivalry.

When the first formal proposal was made to create South Asian union by Bangladesh in 1981, both India and Pakistan responded sceptically. It was not until December 1985, when the agreement was received and SAARC, with seven-nation members, was formed with a charter that all decisions will be based on unanimity, and Article X(2) specifically excluded bilateral and contentious issues from the ambit. As a result, acrimonious issues such as Jammu and Kashmir, Sir Creek, water sharing disputes or India-Bangladesh border relations do not fall under the ambit of SAARC.

The forum only became politically charged when discussion on subjects including terrorism were brought on the table, owing to a lack of proper definition of its ‘unanimously agreed decisions’. However, three decades later, SAARC has considerate success to boast with its institutions and forums for summit-level political meetings and technical-level multilateral interactions. In fact, India’s free regional trade ambition got a boost with Afghanistan’s membership, which was pushed for by the Unites States (US).

During former Prime Minister Yousaf Raza Gillani’s tenure, Pakistan Peoples Party government also considered linking M2 motorway to Wagha border and extending M1 to Torkham border. But the hostile policies of Hamid Karzai’s government and no improvements in Pakistan-India composite dialogue in bilateral relations resulted in halting the progress. Besides, India’s most favoured nation status as per SAARC charter poses issues of transit trade, as it has bilateral implications equal to that of multilateral ones.

Today while maintaining fresh regional alignments and geo political realities, idealism regarding the SAARC has lost steam. With Beijing’s US$45 billion China-Pakistan Economic Corridor, Islamabad is clearly not interested in trade with Delhi especially without significant progress on outstanding issues and renewed hostility by the BJP-led government. Islamabad is also focusing on ties with Central Asia and the Middle East. India too has taken a different route to pursue its regional interests. Delhi has upgraded its ties with Tehran and aspires to reach out to Afghanistan and Central Asia through Iran’s Chabahar port.

For Afghanistan, bilateral relations with Pakistan are the key for its beneficial subscription of the organisation. But Ghani-Abdullah regime has not been aiming to utilise the advantages healthy relations with Pakistan can bring. Instead, they have been conducting diplomacy through media. Kabul has largely acted as Delhi’s loudspeaker, regardless of the ground realities and its enormous dependence on Islamabad.

India sticks to no bilateral meetings at SAARC huddle

US’s efforts, on the other hand, have also lost significant leverage, owing to its deteriorating relations with Pakistan. While it is pressing the country to act as a bridge between India and Afghanistan on the SAARC platform, the US policies towards Pakistan are contrary to its ambitions.

To sum it up, the heydays of SAARC optimism are over. Neither Pakistan nor India are interested in the bloc. Afghanistan is the only key political and diplomatic concern for both the countries, which is why, even for an assortment of less explosive issues, the South Asian association will at best remain a forum for multilateral conferences.

Naveed Ahmad is a Pakistani investigative journalist and academic with extensive reporting experience in the Middle East and North Africa. He is based in Doha and Istanbul. He tweets @naveed360