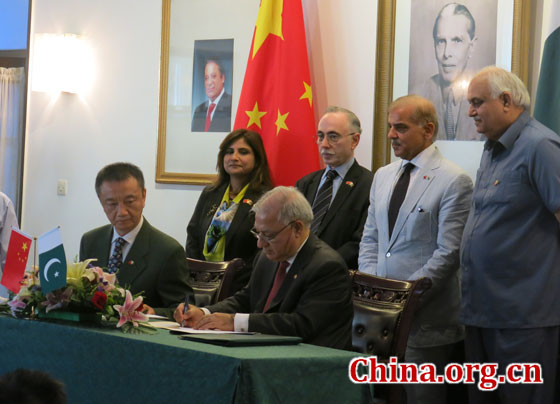 Beijing: Punjab, Pakistan’s largest province in terms of population and economy, inked seven agreements and 17 memorandums of understanding (MoU) with Chinese enterprises, in Beijing Tuesday, during Chief Minister of Punjab (CM) Shehbaz Sharif’s ongoing China visit.
The deals involved the industry of energy, textiles, water treatment and steel and were also related to the establishment of industrial estates, training of master trainers in different skills, and the promotion of trade fairs and exhibitions.

On the same day, the chief minister revealed the development of projects in Punjab under the China-Pakistan Economic Corridor (CPEC) when meeting the press. He said the pace of implementation of these projects in Pakistan was unprecedented.

As a top leader in Punjab, the chief minister credits the rapid growth of Punjab to the efforts of people from all walks of life in his province, when some Chinese officials gave the chief minister a thump up by putting forward the term “Punjab speed” to describe the pace of projects in Punjab.

As the most populous and industrially developed province that accounts for 57 percent of Pakistan’s GDP, Punjab has the duty to contribute more to Pakistan’s development, said the chief minister. Punjab would work closely with other provinces to bring progress to Pakistan.

Pakistan is grateful to the Chinese leadership for the unconditional and consistent support to Pakistan, reiterated the chief minister, when talking about the time-honored friendship between the two countries. “We can only return China’s kindness in the form of blessings for China’s wellbeing.”