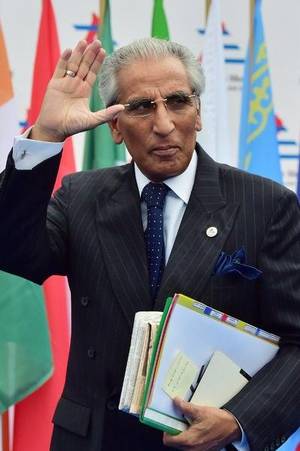 Special Assistant to the Prime Minister (SAPM) on Foreign Affairs Syed Tariq Fatemi met Chinese State Commissioner for Counter Terrorism and Security Cheng Guoping who is here on a three-day visit and reviewed all aspects of bilateral relationship, with a special focus on security and the China-Pakistan Economic Corridor (CPEC).

Mr. Fatmi said Pakistan viewed its relationship with China as the “cornerstone” of its foreign policy and the country would continue to support Beijing on all its issues of core interest, including combating “evils” of terrorism and separatism.

“The SAPM affirmed that friendship with China was the cornerstone of Pakistan’s foreign policy,” Foreign Office quoted Mr. Fatemi as saying. He said Pakistan supported China on all its core issues, while firmly opposing any attempt to undermine China’s sovereignty.

“Pakistan will continue to support China’s efforts to combat the three evils of terrorism, extremism and separatism,” he said in a statement.

The talks take place days after Saeed was put under “house arrest” in Lahore by the Pakistan government after Punjab Province’s Interior Ministry issued an order in pursuance to a directive from the Federal Interior Ministry on January 27.

During the talks, both sides noted that the all-weather friendship between the two countries has withstood the test of time, notwithstanding changes in the international, regional and domestic environments.

Noting the importance of CPEC for the economic development of Pakistan, the two sides stressed that timely completion of the $46-billion project would not only give a boost to Pakistan’s economy, but would also significantly contribute towards regional connectivity, peace and development.

Mr. Fatemi stated that Pakistan was fully committed to the timely and effective implementation of all the projects under CPEC.

Mr. Cheng said China attached great importance to its relations with Pakistan, and supports its sovereignty, independence and territorial integrity. He thanked Pakistan for its consistent support to China on issues of core interest and lauded Islamabad for its fight against terrorism, extremism and separatism.

The two sides expressed satisfaction at the continuing progress in bilateral relations in all fields and expressed their resolve to work towards further solidifying political relations, deepening economic bonds and security cooperation and closer people-to-people contacts to achieve the common goal of China-Pakistan “Community of Shared Destiny.”