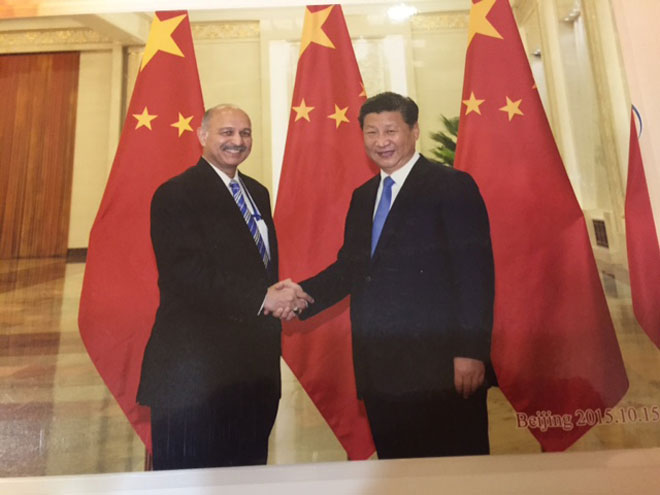 Senator Mushahid Hussain Sayed, Chairman, Parliamentary Committee on China-Pakistan Economic Corridor (CPEC) & Secretary General of Pakistan Muslim League (PML), attended the Asian Political Leaders Conference in Beijing on invitation of the Communist Party of China (CPC) Upon his return to Islamabad, talking to the media, Senator Mushahid Hussain termed the conference a ‘big success’ as he said that ‘this was the biggest ever conference of Asian leaders, and it also had representation from Africa and Latin America, coinciding with the 60th anniversary of the Bandung Afro-Asian leaders conference held in 1955’.

Senator Mushahid Hussain, who is member of the 4-man Bureau of the Standing Committee of the International Conference of Asian Political Parties (ICAPP), which co-hosted the conference along with CPC, addressed the main session of the Conference plenary in the presence of the chief guest, the Vice President of China, Li Yuanchao. He also helped draft the final outcome document of the conference, the ‘Beijing Initiative on Silk Road’, which he then presented before the entire Conference, where it was adopted unanimously.

Senator Mushahid Hussain said ‘Pakistan is honoured as the CPEC is the centrepiece of the Silk Road vision presented by President Xi Jinping who, during his visit to Pakistan, announced an investment of $ 46 billion, for building the CPEC’. He also said that the ‘Silk Road Economic Belt and the Maritime Silk Road both converge in Pakistan at the Gwadar port, which, in turn, would be linked with the Chinese City of Kashgar through a road and rail network’. He welcomed the revival of the Silk Road as it reflected the changes in global power politics, since the balance of economic, cultural and political power was shifting from the West to the East, with the resurgence of Asia and peaceful rise of China.

Senator Mushahid Hussain proposed that a permanent institution be established to promote exchanges and cooperation among the Asian and other political parties to promote the Silk Road vision, practically take it forward and make it into a living reality. This proposal was accepted by all the political parties present at the conference.

The Political Party leaders were received together in a small group by President Xi Jinping at the Great Hall of the People, where he said ‘China seeks a relationship of peace, progress and prosperity with all the 65 countries along the Silk Road on the basis of equality, reciprocity and win-win cooperation’.