Gwadar and “the String of Pearls” 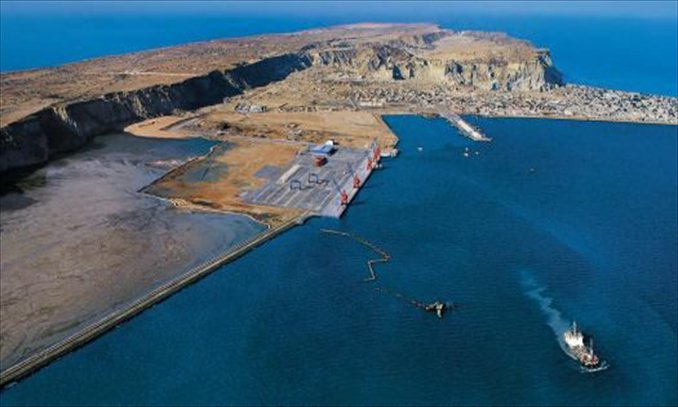 Is China actively building up its maritime presence in the Arabia Sea, to dominate vital sea lanes and perhaps encircle India with a chain of naval bases? There can be little doubt that China views Gwadar as a potentially useful asset. China, however, will know better than anyone that Gwadar has two considerable limitations.

Gwadar from the air is an intriguing sight: a city on the southwest of Pakistan’s Balochistan province jutting out into the blue and turquoise of the Arabian Sea. Just visible are the narrow strips of road leading along the coast towards Karachi in one direction, the Iranian border in the other, and a third, snaking northwards. Yet inland, all you can see are hundreds of miles of brown sand and darker, angrier volcanic hills–some of the most inhospitable territory in the world–navigated only by occasional camel convoys and four-wheel-drive trucks. Only the hardiest people live here: the fiercely independent Baluch, who have infuriated rulers.

The received wisdom is that Gwadar is a vital strategic Chinese interest: one component of a “string of pearls” by which China will ensure the security of its imports if ever the Straits of Malacca were closed. But where do these theories come from? And do they stand up to any serious scrutiny?

The “string of pearls” sounds like a suitably ethereal Chinese term, but has more prosaic origins. Consultants Booz Allen produced a report titled “Energy Futures in Asia” for the U.S. Department of Defense in 2004 and, according to Washington Times, postulated that “China is building strategic relationships along the sea lanes from the Middle East to the South China Sea in ways that suggest defensive and offensive positioning to protect China’s energy interests, but also to serve broad security objectives”.[1] The report listed two of the “pearls” as Chittagong in Bangladesh and Gwadar just before  speculating about eavesdropping bases: a canal in Thailand, an oil pipeline in Burma, and a railway line in Cambodia.

Since then, the string of pearls theory has caught the imagination of armchair strategists. An additional component grafted onto an already alarmist theory is that it is a strategy to encircle India. To support this notion of encirclement, writers on the subject choose from a menu of Chinese civilian infrastructure projects: in Sittwe in Burma, Chittagong, Hambantota in Sri Lanka, Marao in the Maldives, and in Woody Island in the Paracel Islands of the South China Sea.

So, testing out this theory by looking at Gwadar, which most analysts will attest to being the most alarming of the “string of pearls”. It is due west of Karachi and sits only 250 kilometres from the Strait of Hormuz. According to the British Guardian newspaper in 2005, “Gwadar’s ambitious plans hinge on a giant deepwater port whose money, bricks and mortar come from China. Last year 400 Chinese labourers worked 24-hour shifts to complete the project, intended to serve Afghanistan and Central Asia…”.[2] But according to a Pakistani daily, it provides “an energy and trade corridor that would connect China to the Arabian Sea and Strait of Hormuz, a gateway for a third of the world’s traded oil, overland through an expanded Karakoram Highway… ”, thereby cutting “hundreds of kilometres off the distance which oil and gas imports from Africa and the Middle East have to travel to reach China…”.[3]

Now, the reality. Pakistan bought Gwadar from Oman in 1958 precisely because of its potential as a port. Far from the suggested urgency of the Guardian article, it must be one of the slowest port construction projects: only a small wharf was built between 1988 and 1992. A plan to develop it further was approved in 1993, and work on Phase I began in 2002 with significant Chinese financing. At the start of Phase II in 2007, the administration of the port was handed over to the Port of Singapore Authority (PSA International), hardly the actions of a China wishing to use it as a strategic naval base. After several disputes, the contract was re-awarded in 2013 to state-run China Overseas Port Holding Company.

There can be little doubt that China views Gwadar as a potentially useful asset. Why else would it have financed the project so generously? China, however, will know better than anyone that Gwadar has two considerable limitations: far from being a heavily fortified rock like Gibraltar, it is vulnerable both from the sea and land; secondly, the concept of roads and oil pipelines stretching through Baluchistan and eventually connecting, via the Karakorum Highway to Xinjiang province is rather ambitious. China has had enough difficulty protecting its workers at the Saindak Copper-GoldMine, and knows full well that the writ of the Pakistan Army does not run throughout Baluchistan. Furthermore, the one province where China would not choose to send its vital strategic resources from Gwadar is to its troubled, mainly Muslim Xinjiang.

A couple of years ago, a retired American admiral observed to this writer that, not before too long, 85% of oil tankers leaving the Strait of Hormuz “will turn left towards Asia”. It is only a matter of time, he added, before a U.S. president will ask why the U.S. finances, at enormous expense to its taxpayers, carrier battle groups to protect China’s energy imports! I reflected that, at this point, Gwadar might become useful as a base for Chinese naval vessels to keep the vital international sea lanes open. Yet when China assisted in patrols against Somali pirates in recent years, it used Karachi instead.

During his visit to Islamabad in April 2015,President Xi Jinping announced the development of a $46 billion China-Pakistan Economic Corridor, but in a new world of cheaper oil and China’s own sharply reduced GDP growth, it remains open to question whether Gwadar will ever become a strategic Chinese port on the Arabian Sea.