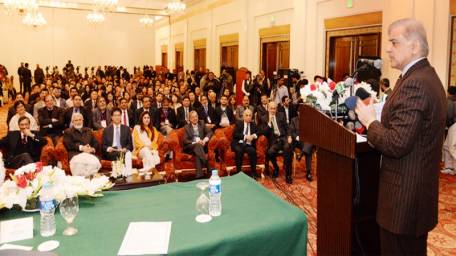 Lahore: Chief Minister Punjab Shahbaz Sharif has said that China is the most reliable friend and always stood with Pakistan and helped it in all respects.

He was speaking at the Pakistan-China Business Opportunities Conference jointly organised by the Punjab Board of Investment and Trade (PBIT) and Lahore Chamber of Commerce and Industry (LCCI).

The chief minister said that China was a very important partner in Pakistan’s economic development and bilateral trade.

The involvement of Chinese enterprises both in term of technical and financial assistance in several development projects is reflective of our cordial relations based on mutual trust and sincerity, he added.

Shahbaz termed the China-Pakistan Economic Corridor (CPEC) as an energy and infrastructure programme with the investment of $46 billion in Pakistan, adding that this is the biggest investment ever made by China in any foreign country. This programme, he said, when completed, would help end power outages in the country, and ensure seamless connectivity between China, South and Central Asia.

He said that investment climate is getting better with every passing day due to best policies of Punjab government and all possible facilities are being provided to foreign investors.

Chinese Consul General Yu Boren said that both Pakistan and China had huge potential to increase bilateral trade, as the existing volume of two-way trade between the two countries is very small when it is compared with the total Chinese business. He said that incentive package and CPEC is enough to make the point that China gives top priority to Pakistan in terms of business and trade.

Pak-China Friendship Association Chairman Sha Zukang spoke highly about Pakistan and said that CPEC would further cement trade and economic ties between the two countries. He said that China-Pakistan relations had become an example of state-to-state relations, adding that both countries looked forward to have further exchanges of visits, to have more high level contacts to promote mutual friendship and cooperation in various fields including politics, economy and people to people contacts.

He said CPEC would be further promoted, particularly cooperation in trade, investment, energy and communications would be strengthened.

LCCI President Sheikh Muhammad Arshad said both the countries not only share borders but also have unanimity of views on various political and economic issues. He said that the two countries have a combined market of more than 1.5 billion people but the trade volume needs to be pushed up.

He suggested that Pakistani material approved from Pakistan Engineering Council should be used for CPEC projects, adding that Chinese technological advancement could help Pakistan overcome economic challenges in a short span of time. He also announced to set a “China Desk” at the LCCI to provide necessary information to the investors. He informed the participants of the conference that LCCI is making all out efforts to bring the private sector of the two friends closure. He said that the LCCI is also organising Chinese language courses for its member so that they could interact with their Chinese counterparts quite easily.