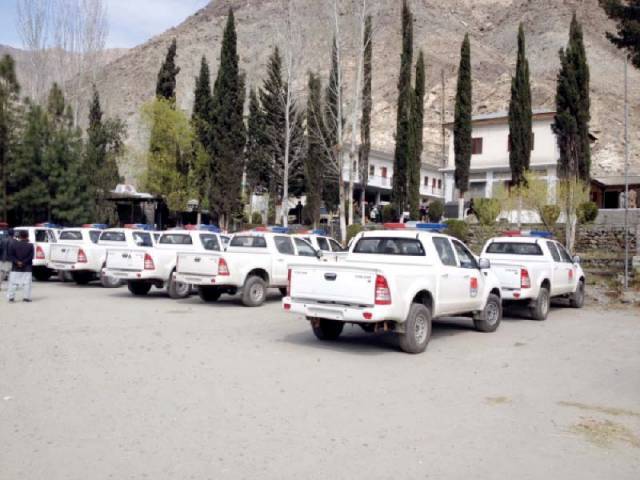 Gilgit: China has donated 25 vehicles to the Gilgit-Baltistan government as part of China-Pakistan Economic Corridor (CPEC).

The fleet of double cabin vehicles was received by G-B IGP Zafar Iqbal Awan on behalf of the regional government in Gilgit on Friday. “These vehicles are a gift from our friends,” Adviser to G-B Chief Minister Abid Baig said.

According to an official, security is not only the priority of the government but a prerequisite for the successful completion of CPEC.

He said the vehicles will be used to provide security to Chinese engineers working in parts of G-B.

“This step can be seen as one of the tools used to ensure security to Chinese workers in the region,” he said. The official added more aid will be provided as work on the corridor passing through G-B continues.

According to the official, the vehicles are equipped with modern security gears and will soon be dispatched to areas which require them.

The latest aid from Chinese government came a few days after G-B government announced its decision to allocate a substantial piece of land to the Pakistan Army in Diamer district so it can set up its headquarters to ensure a safe working environment for CPEC.

The site is situated in Thak Das, a barren piece of land near Chilas, where a brigade will be stationed.

G-B Chief Minister Hafeezur Rahman invited foreign tourists to visit G-B and promised to provide security and other facilities to them. This was mentioned in a statement issued by the CM’s office on Saturday. As per the document, Rahman was addressing the German Economic Forum at Berlin on Friday. He said G-B is “one of the world’s most peaceful region that offers spectacular sites to visitors”.

“The region has everything a tourist wants in a place,” the statement quoted the CM as saying.

During his official visit, Rahman also attended a book launch organised by the Pakistan Embassy.