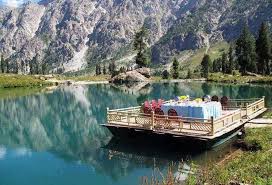 While talking to media, he said that GB is called a paradise for mountaineers and is home to five of the 14‘eight- thousanders’ (peaks above 8,000 metres) in the world, including the second highest mountain, K2, and the infamous ‘Killer Mountain’, Nanga Parbat. It also hosts more than 50 mountains with an elevation of over 7,000 metres.

Minister for Kashmir Affairs and Gilgit-Baltistan Chaudhry Barjees Tahir has said that CPEC would bring prosperity in the country, especially in GB.

During a meeting with a delegation of Pakistan Muslim League-Nawaz (PML-N) from GB, the minister said, the Corridor would be proved as a milestone in the history.

The minister said that this project would also promote tourism in GB, which would ultimately be favourable for the local public.

He said that the Pak-Army troops would be deployed to make the Karakorum Highway safe for the travellers.

According to the Asian Development Bank (ADB), Gilgit-Baltistan is the producer of over 100,000 metric tons of fresh apricots annually.

Development consultant Javaid Akbar, who also belongs to the area, said that CPEC will surely bring development, prosperity and business opportunities as far as the people of the region are concerned.

Parliamentary Secretary for Law and Justice of GB Legislative Assembly Aurang Zaib Khan said that the Diamer-Bhasha Dam, which is located in GB would generate 4,500 MW of electricity.

“People of Gilgit-Baltistan are facing a shortage of electricity nowadays, and the completion of Diamer Bhasha will surely minimize loadsheding in the region.

The CPEC is a collection of projects presently being implemented at a cost of $46 billion to rapidly expand and upgrade Pakistani infrastructure, as well as deepen and broaden economic links between Pakistan and China.

The corridor passing through Gilgit-Baltistan in the north to reach the Gwadar port in the south of the country will transform the economy and help bridge Pakistan’s power shortfall, he added

In his recent visit to Gilgit-Baltistan, Prime Minister Nawaz Sharif laid the foundation stone of a fiber optic project which is part of the CPEC.

The project will be completed in two years at the cost of Rs 4.4 billion.

It will lay an 820-kilometer long cable from Rawalpindi to Khunjerab and will provide an alternative telecommunication route between Pakistan and China after its completion.

As a result, people of GB will be the core beneficiary of this project because the region is still deprived of 3G and 4G and other modern telecommunication facilities.