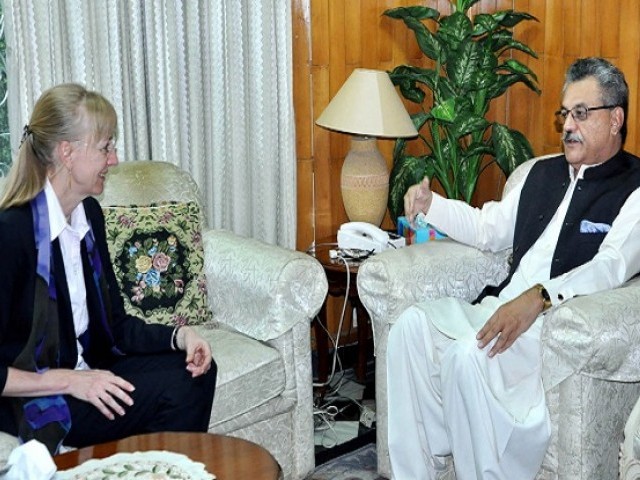 The Ambassador said that visit of a number of German delegations to Pakistan is an ample proof that Germany gives importance to trade and economic ties with Pakistan. She said that a high-powered German business delegation, led by Deputy Minister, will visit Pakistan in the 2nd half of the year. She said that Germany is also planning to hold a spring festival in Lahore in the month April.

Ina Lepel said strong liaison between Chambers of Commerce & Industry and business institutions of the two countries would definitely enhance the mutual trade volume therefore the LCCI should take a stride in this regard. German Ambassador said that Pakistan’s exports are enhancing after GSP Plus status. Pakistani business community would have to adopt an aggressive strategy as customers in European Union are not only quality conscious but also very selective in making deals with other countries, she added.

Speaking on the occasion, the LCCI Senior Vice President Almas Hyder said that Pakistan and Germany have very cordial diplomatic relations and are steady trading partners heading towards finding new avenues of trade and investment. Germany is one of the few trillion economies in the world and we are glad to have trade and investment relations with Germany. Almas Hyder said that Germany happens to be one of the major trading partners of Pakistan in European Union. We are grateful to Germany for supporting Pakistan with regard to GSP plus status. The consistent rise in two way trade between two countries is evident of the fact that the joint efforts made at public and private sector levels are paying off.

The Pakistani exports to Germany registered upward trend from 2012 on with dollar 989 million to dollar 1.08 billion and dollar 1.22 billion in next two years. The imports from Germany to Pakistan were over one billion dollar in 2014 that resulted in taking the overall trade level to dollar 2.29 billion. With such a trend that has now put Pakistan in a favourable balance of trade with Germany, we can benefit a lot in near future. “We look up towards Germany to further help us in addressing the energy crisis in Pakistan. Germany has earned respectable name in the field of alternative energy solutions in the world”, he said.

He invited the German investors to avail the trade and investment opportunities in Pakistan through joint ventures with their Pakistani counterparts. Pakistan offers a great potential for foreign investment by way of having a strategic location with abundant raw materials and cheapest labour force. The LCCI Vice President Nasir Saeed said that ongoing CPEC project offers a lot to international investors as well. It goes without saying that any project initiated in Pakistan will automatically result in creating business opportunities that can be extended to the regional countries including Central Asian States.