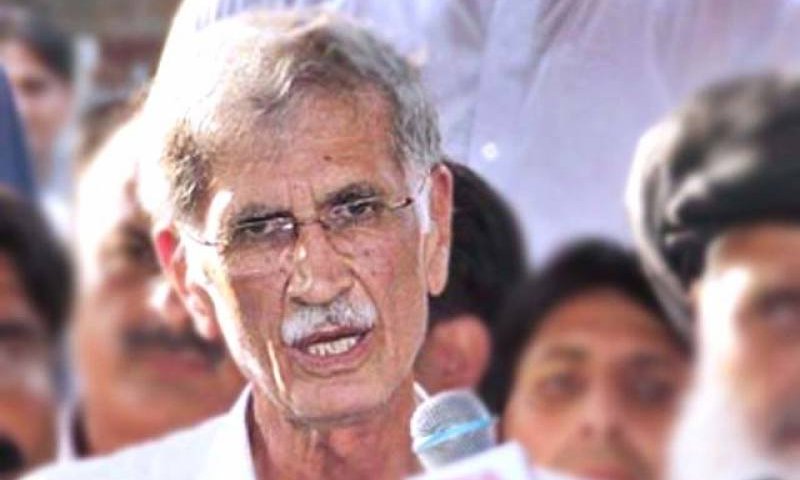 NOWSHERA: Chief Minister Pervez Khattak has said that his government would not accept the China-Pakistan Economic Corridor (CPEC) unless it included all the facilities of the economic corridor.

Talking to reporters at the wedding ceremony of Pakistan Tehreek-e-Insaf (PTI) leader Malik Ibrar Khan’s sons, he said that the western route of the CPEC had nothing more than a road.“We would not accept the CPEC unless it has the railway line, LPG pipeline, industrial zones and optic fibers, which are included in the project,” he said.

Pervez Khattak said that more than 1,000 industrialists had contacted his government for investment in the industrial zones, which were being established in five districts.

Industrial zones would facilitate investors through one window operation. He said that the government could not provide jobs to all unemployed, adding that facilitating private sectors’ investment would help end joblessness.

He requested the councillors to resolve the problems of their respective areas, adding that 20 percent funds of sanitation and cleanliness would be provided to the village and tehsil councils for cleanliness.

He said that cleanliness was among the top priorities of his government and warned of strict action in case of negligence. The chief minister disclosed that 470 solar-powered tube wells were being installed throughout the province.

He asked the masses to cooperate with the government in the drive against encroachment, vowing to continue the drive till the elimination of the practice.Our correspondent adds from Charsadda: Chief Minister Pervez Khattak has said that VIPs would be provided security which was the responsibility of the government.

Talking to reporters after offering condolence to the family of Awami National Party leader Sajid Khan in Rajjar on Sunday, he said that security should not be confused with VIP protocol.

However, he stressed that road would not be blocked for VIPs anywhere in the province.Commenting on the centre-Sindh controversy over the Rangers’ power in Karachi, he said that he was not aware of the whole situation. However, he said that the entire country was dependent on the metropolitan city and every one should support the initiatives for peace there.