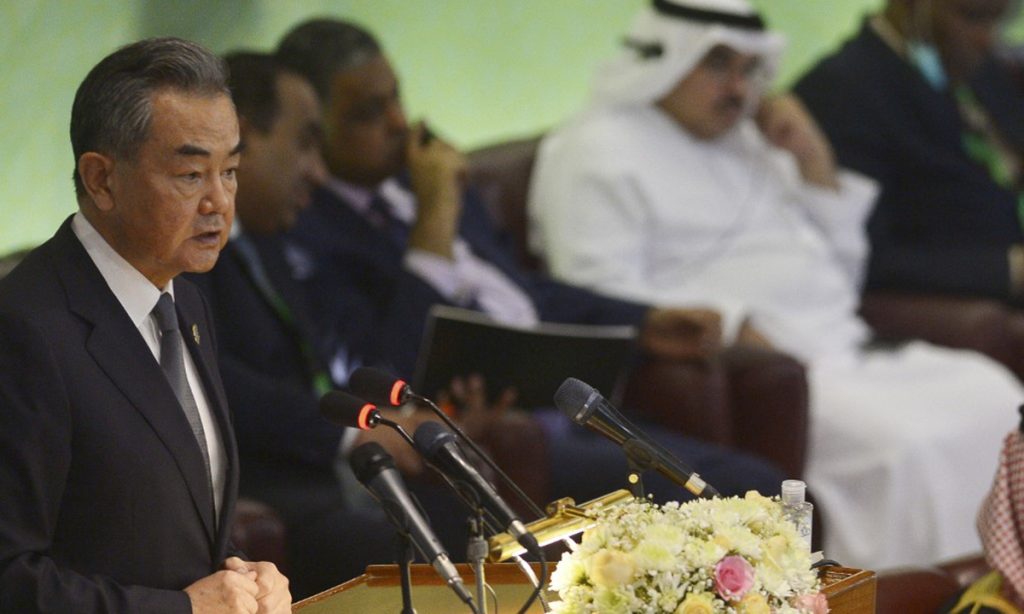 Both the Chinese civilization and the Islamic civilization are ancient civilizations of great influence in the world. Our exchanges have stood the test of the changing international landscape for a thousand years and enjoy a profound history and solid public support. Friendship is the mainstream of our relations, equality is the basis for our interactions and win-win cooperation is the goal of our cooperation.

Over the years, we have always respected and trusted each other and supported each other’s core concerns. We will never forget that Algeria and other countries jointly submitted a resolution, and nearly 30 Islamic countries firmly supported it, to help China restore its legal status in the UN. Similarly, China has never hesitated or been absent in its support for the Palestinian issue, which is of the greatest concern to the Islamic world.

We have always adhered to solidarity and mutual assistance to achieve common development. After the outbreak, Islamic countries immediately offered China valuable support, and China also provided 1.3 billion doses of vaccines and a large amount of anti-epidemic supplies to 50 Islamic countries in a timely manner. To date, China has signed cooperation documents with 54 Islamic countries and carried out nearly 600 major projects involving 400 billion US dollars, bringing tangible benefits to the two peoples.

Facing a turbulent and changing world, the theme of this foreign Ministers’ Meeting, “Partnership for unity, justice and development”, reflects the common aspiration of most countries in the world. China is ready to work with Iran to advocate true multi-lateralism, uphold the purposes and principles of the UN Charter, safeguard the international system with the UN at its core and forge ahead hand in hand in the pursuit of national rejuvenation. China is ready to build four partnerships with Islamic countries.

We should be partners of unity and cooperation. We firmly support each other in safeguarding national sovereignty, independence and territorial integrity, in independently exploring development paths suited to our national conditions, and in safeguarding our legitimate development rights and interests as well as the common interests of developing countries.

We need to be partners in development and revitalization. China will continue to provide 300 million doses of vaccines to Islamic countries to help them build a defense of health. We will continue to synergize our development strategies. With high-quality belt and Road cooperation and joint implementation of global development initiatives as the twin engines, we will consolidate traditional cooperation and foster new highlights, boost the development and revitalization of China and Islamic countries, lead the trend of South-South cooperation, and inject strong impetus to the implementation of the UN 2030 Agenda for Sustainable Development.

We need to be safe and stable partners. China will continue to support Islamic countries in applying Islamic wisdom to solve contemporary hotspot issues and firmly hold in our own hands the key to maintaining stability and promoting peace.

China will continue to stand firmly on the side of the Palestinian people and support the early convening of a more authoritative and representative international peace conference on the basis of the two-state solution so as to promote a comprehensive and just settlement of the Palestinian issue.

China will respect the choice made by the Afghan people, support Afghanistan in achieving inclusive government and steady governance, and open a new chapter of peace and reconstruction.

On the Kashmir issue, we have once again heard the call of many Islamic friends. China shares the same aspiration.

China supports Russia and Ukraine in continuing peace talks for the sake of ceasefire, an end to war and peace. We need to prevent humanitarian disasters and prevent the spillover of the Ukrainian crisis from affecting or harming the legitimate rights and interests of other regions and countries.

We need to be partners in mutual learning among civilizations. We should uphold the values of peace, development, equity, justice, democracy and freedom shared by all mankind, and oppose division and confrontation based on ideological lines. We should uphold exchanges and mutual learning among civilizations, oppose the theory of “the superiority of civilizations”, the theory of “clash of civilizations”, and the distortion and smear of non-Western civilizations. We should deepen preventive counter-terrorism and deradicalization cooperation, reject “double standards” in counter-terrorism, and oppose linking terrorism with any particular ethnic group or religion.

History has proved and will continue to prove that China is a sincere friend and cooperative partner of the Islamic world. China is ready to work with Islamic countries to promote a multi-polar world, democracy in international relations and diversity of human civilizations, and make unremitting efforts to build a community with a shared future for mankind.