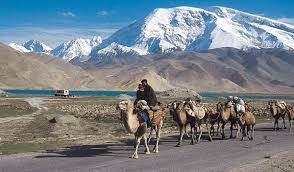 Islamabad: Companies from China‘s violence-prone far western region of Xinjiang signed deals worth about $2 billion (1.42 billion pounds) with Pakistan this week during a visit to Pakistan by Xinjiang’s top official, who sought to cement ties with an important security partner.

Pakistan last year agreed energy and infrastructure projects worth $46 billion with China to set up a so-called China-Pakistan Economic Corridor, in a boost to Pakistan’s crumbling infrastructure and energy sector.

In return, China will get a free trade zone in Pakistan’s Gwadar port and access to the Arabian Sea. New Pakistani roads will open up routes for Chinese goods into Europe and the Middle East from landlocked Xinjiang, which borders Pakistan.

“China and Pakistan have a deep friendship, are good neighbours, friends, brothers and partners,” the newspaper cited Zhang as saying.

“On this trip, I have deeply felt this friendship and the atmosphere surrounding the China-Pakistan Economic Corridor.”

The $2 billion in agreements covered infrastructure, solar power and logistics, among other projects, signed by companies from Xinjiang with their Pakistan counterparts, the newspaper said, without giving details.

China and Pakistan call each other “all-weather friends” and their ties have been underpinned by long-standing wariness of their common neighbour, India, and a desire to hedge against U.S. influence in the region.

But China has also long urged Pakistan to weed out what it says are militants from Xinjiang, who are holed up in lawless ethnic Pashtun lands on the Pakistan-Afghan border, home to a mix of groups, including the Taliban and al Qaeda.

While meeting Sharif, the two countries agreed to continue working together to fight terrorism, strengthen border controls, maintain regional peace and stability and ensure the economic corridor projects are protected, the newspaper said.

Zhang also met Pakistan’s military on the trip, it added, without elaborating.

Hundreds of people have been killed in unrest in Xinjiang in the last few years.

Exiles and rights groups say Chinese controls on the religion and culture of the Muslim Uighur people who call Xinjiang home is largely behind the violence, rather than any well-organised militant groups.

China denies any rights abuses in Xinjiang and says its people are free to practice Islam.

Zhang visited a mosque in Islamabad, where he “got a deep understanding of Pakistan’s religious affairs management”, the Xinjiang Daily added.