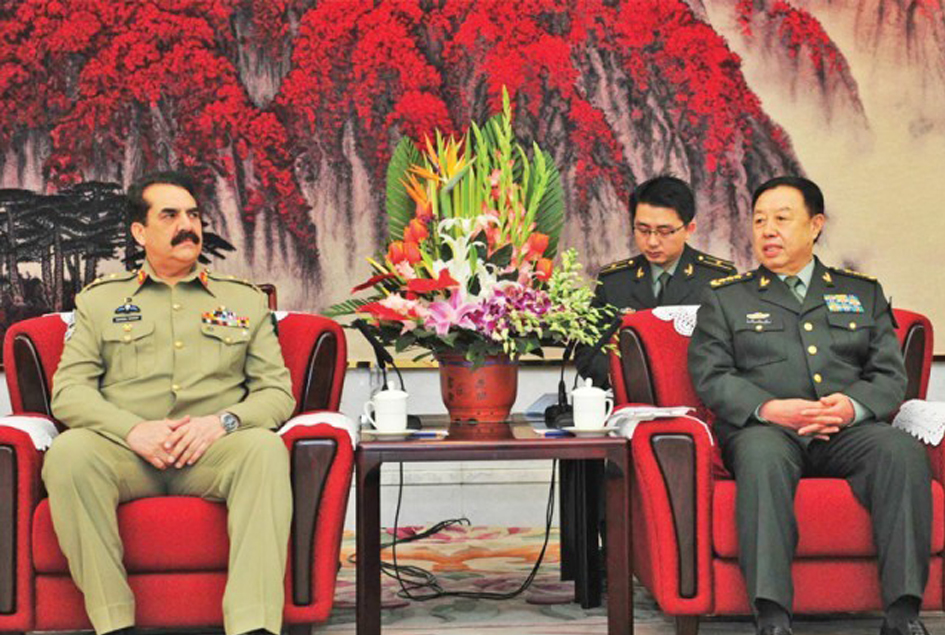 ISLAMABAD: China has pledged  to support Pakistan on the security of China-Pakistan Economic Corridor.

“We look forward to close cooperation with Pakistan to ensure proper management and security of the CPEC,” Vice Chairman of Central Military Comm­ission of China Gen Fan Changlong was quoted by ISPR as telling Army Chief Gen Raheel Sharif during a meeting at the General Headquarters.

Gen Fan is ranked third in the Chinese hierarchy.

The visit, which took place after a break of 11 years, aims to strengthen military-to-military relations and collaboration on regional peace and stability.

The two countries launched this year the $46 billion CPEC project, which connects Gwadar at the Arabian Sea with Xinjiang and includes energy, transportation, and infrastructure projects.

Security has emerged as a major concern in the execution of the project. The Frontier Works Organisation (FWO), which is constructing 870-kilometre road network in Balochistan as part of western route of the CPEC, has lost 25 of its workers — both military personnel and civilians — in about 200 security-related incidents since the start of the work on the road.

Pakistani officials believe that India has been threatening the project because it counterbalances its (Indian) plans for exploiting Chinese weakness in the Indian Ocean by blocking the Strait of Malacca in times of conflict.

Gen Fan, who travels to India after the Pakistan visit, stressed during his meeting at the GHQ that the CPEC was equally beneficial for both Pakistan and China and appreciated Pakistan’s efforts for maintaining its security.

The army is setting up a 10,000-strong special force to protect projects to be carried out under the CPEC and Chinese workers associated with them.

DEFENCE COOPERA­TION: Gen Fan assured his interlocutors that China would continue its defence cooperation with Pakistan.

China is Pakistan’s biggest military hardware supplier and it believes that bilateral defence and security cooperation needs to be deepened to enrich the strategic cooperation.

Admiral Youfei told journalists that China would continue its military supplies to Pakistan to enable it to maintain peace in the region.

He underscored that the bilateral defence cooperation was not against any country of the region.

The two countries consider ETIM as a common threat. The terrorist group, which previously had sanctuaries in North Waziristan, has been particularly targeted during the Operation Zarb-i-Azb.

They reaffirmed the resolve to further enhance cooperation between their armed forces, a spokesman for Pakistan military said.