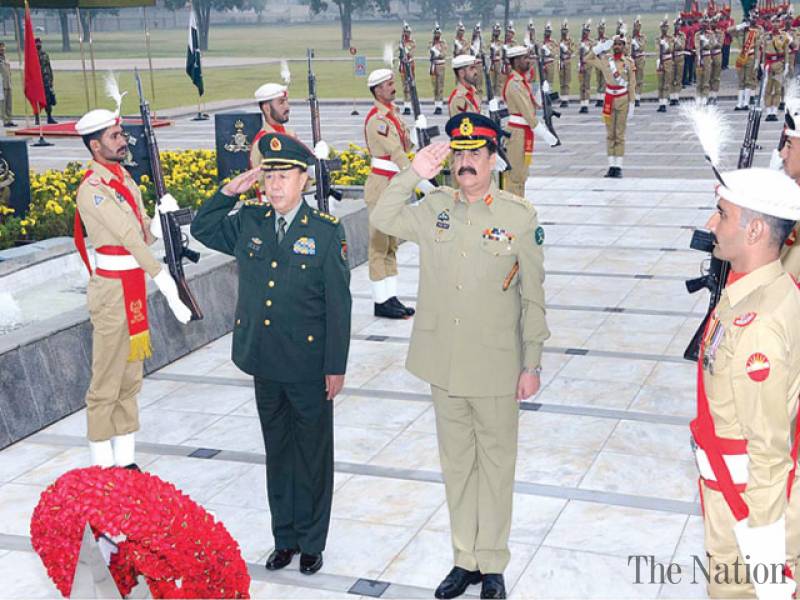 Islamabad: A high ranking official of Chinese military Thursday rejected New Delhi’s concerns about China encircling India by enhancing capability of Pakistan’s armed forces through high-tech equipment and weapons as ‘unnecessary and baseless’.
“This is unnecessary and baseless concern,” said Rear Admiral Guanyoufei, Director General Foreign Affairs, Ministry of National Defence, in a press briefing about the visit of a high level Chinese Military delegation to Pakistan headed by Vice Chairman of Central Military Commission, General Fan Changlong.
The CPEC project being built under ‘one belt one road’ policy would benefit all the regional countries including India, Admiral Guanyoufei said when asked for his comment about India’s concerns over China-Pakistan Economic Corridor (CPEC) and China’s providing eight high tech submarines to Pakistan.

When asked about contribution being made by China in CPEC security, the official said it was under discussion between militaries of Pakistan and China, adding “China will meet all the necessary requirements”.

Sharing details about the activities of General Fan Changlong’s delegation, Admiral Guanyoufei said the delegation had a series of meetings with Pakistan’s top civil and military leaders and appreciated Pakistan’s role in counterterrorism.

He said both the ‘iron brothers’ (China and Pakistan) have agreed on a number of issues to further advance their all-weather strategic partnership.

This is the first visit of Vice Chairman of Central Military Commission of China after a lapse of 11 years.

Welcoming General Changlong to Pakistan, Prime Minister Nawaz Sharif said that friendship with China is the cornerstone of his country’s foreign policy as both the countries enjoy unparalleled relations in the contemporary world.
He said the time-tested friendship between the two countries is based on strong mutual trust, cooperation and convergence of views on regional and global issues.

Speaking on the occasion General Changlong said, “The mutually supportive cooperation in the field of defence is a critical factor in maintaining peace and stability in the region.
”
General Changlong also called on Chief of Army Staff General Raheel Sharif in Rawalpindi and discussed matters of mutual interest, regional security, steps for regional stability and enhanced bilateral defence collaboration.

General Raheel said Pak-China relations are all-weather and based on mutual trust and cooperation.
He said this relationship has survived the test of times and is only bound to grow.
General Fan Changlong said China and Pakistan are the best brothers, good friends and strategic partners.
“We share the tradition of mutual understanding, mutual trust and mutual support.
China deeply appreciates the determination of Pakistan Army in counterterrorism and the successful operation in various fields,” he said.

He said CPEC is equally beneficial to both China and Pakistan.
He lauded the efforts made by Pakistan Army for safeguarding the CPEC.
“We look forward to close cooperation with Pakistan side to ensure proper management and security of CPEC.
”
Earlier on his arrival, the Chinese General laid floral wreath at Yadgar-e-Shuhada and paid rich tribute to the martyrs.