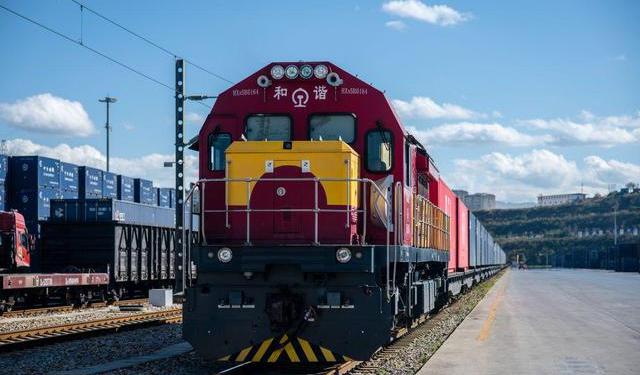 On Dec 3, 2021, the China-Laos railway opened to traffic, connecting Kunming in southwest China’s Yunnan province with Lao capital Vientiane. The railway is a landmark project of China’s Belt and Road Initiative. In addition to the extreme construction difficulty and risks of the project, what is less known is that the construction team also faced a deadly threat in the construction process — a large number of unexploded ordnance (UXO) left by the United States during the Vietnam War are buried along the railway.

Laos, a close neighbour of China, is the only inland country of Southeast Asia, with mountains and plateaus covering 80 percent of its 236,000 square kilometers. Before the completion of the China-Laos railway, Laos only had 3.5 kilometres of railways, ranking fourth from the bottom among the 146 countries in the world with railways. It was known as a “landlocked country” for its backward transport system.

The “lock” has not only restricted the Lao people’s access to and from the outside, but also restricted the pace of economic development in Laos. The China-Laos railway is therefore of great significance, the win-win cooperation brought about by the Belt and Road initiative will be an opportunity to help the Lao people achieve a better life.

The China-Laos railway is the first international railway to be built with Chinese investment, adopt Chinese technical standards, use Chinese equipment and connect directly with China’s railway network.The project took five years, during which countless hardships were experienced. Not to mention the long negotiation process, the project itself also had extremely rare difficulties and risks, such as poor meteorological and geological conditions, high environmental protection requirements, and even access to no man’s land…

But what scared the workers the most was the deadly threat that they faced: a large amount of UXO from US carpet bombing during the Vietnam War, which Laos was embroiled in. In order to block the Ho Chi Minh Trail, the supply route to the north Vietnamese forces, the United States covertly extended the battlefield into Laos at the instigation of the CIA, flying 580,000 bombing missions between 1964 and 1973, dropping more than two million tons of bombs (or 270 million bombs), with most being the dreaded cluster bombs.

Within nine years, 270 million bombs in total weighing 2 million tons were dropped on Laos, equaling eight bombs per minute on average. The total number of bombs is more than that dropped during World War II.

At the time, Laos had a population of about two million people, giving each Laotian a ton of bombs, making it “the most heavily bombed country per capita in human history.”

Although the Vietnam War eventually ended, the Lao people are still living in its nightmare of destruction. According to CBS, about 80 million  dropped bombs did not explode, which is 30% of the total.

For decades, these unexploded bombs have been a threat to the lives of the Lao people. Some parts of the land in Laos cannot be cultivated because of the bomb threat, and the country’s national construction and economic development have been seriously affected. From 1975 to 2008, more than 50,000 Laotians, many of them children, were killed by unexploded bombs, according to the government statistics.

Ironically, the entire amount the US spent on clearing unexploded bombs in Laos between 1995 and 2013 was only equivalent to the cost of three days of bombing during the Vietnam War.

When then US President Barack Obama visited Laos in 2016, he promised an additional $90 million for clearing unexploded bombs, but did not apologize for the bombing.

In recent years, with the help from all sectors of society, the number of Lao people killed by unexploded bombs has been reduced to dozens from thousands a year at the end of the war, but those bombs are still a huge hazard.

According to Vientiane Times, during the 25 years between 1996 and 2020, Bomb disposal teams in Laos destroyed more than 1.6 million unexploded ordnance on 70,000 hectares of land, including more than 4,200 large bombs. It could take as long as 50 years or even a century to completely remove them. And just at the end of 2021, three bomb disposal workers were killed in explosions.

As the bomb disposal teams have to probe inch by inch, while also protect the land for cultivation, it takes more than two months to probe one acre (0.4 hectares) of land. Due to the low efficiency and high cost, bomb removal in Laos has been slow.

Although the Mordin–Vientiane section of the China-Laos railway is located in the north-western area where there is less UXO, the density of bombs there is still alarming.

According to Lao State News Agency (KPL) in December 2016, a 16.9 km long area with UXO was found at the Nateuy station of the China-Laos railway.

The Lao Ministry of National Defence informed the provincial government of Luang Namtha that there was still UXO in one of the three villages that the railway was to pass through. The bombs were found in the village of Natu, and the Chinese construction company, which had finished 70% of the survey work, had to stop pending bomb clearance.

At almost the same time, Liu Qianli, an engineering head for the China-Laos railway from a Sinohydro unit of Beijing-based PowerChina, reached Luang Prabang, an ancient city in Laos. On arrival, he was first stunned by the dense primeval forests and the frequent roars of animals from within.

But what really scared him was the ubiquitous UXO in the mountains. After contacting the Lao Ministry of National Defence for bomb disposal, more than ten bombs measuring 30 to 40 centimeters in length were cleared from the construction area. “To dig on a no man’s land is nothing compared to the fear of those unexploded bombs in the jungles, which makes me feel unprecedented pressure.”

Li Bin, commander-in-chief of the project, who had 35 years of engineering experience, shared a similar experience, “You can never imagine the scenario on my first day here. The county chief and the militia led the way, and local people chopped trees. As machinery couldn’t get in, everyone had to inch forward on foot.” “The unexploded bombs here could not be cleared even in a hundred years. The construction process made people nervous.”

It is no exaggeration to say that this is probably one of the most dangerous railway projects in the world. China and Laos, however, did not give up the tough, dangerous and “explosive” task. Instead, the two sides worked closely together to finish the project!

According to China’s Belt and Road portal, to ensure the project’s smooth progress, the Lao Ministry of National Defence assigned six solider units in accordance with the railway sections, with ample workers, vehicles and necessary equipment to remove unexploded bombs from the marked areas of the project. The clearance process lasted from January to May 2017.

A UN DESA report entitled “Progress of the Belt and Road Initiative and sustainable Development Goals in Laos” showed that according to statistics from China-Laos Railway Project Management Committee in 2019, about 459 UXO bombs and 463,536 pieces of shrapnel over 2,931 hectares had been cleared during the construction of China-Laos Railway between January 2017 and July 2019.

The report also pointed out that though that is just a small part of the nearly 80 million remaining unexploded bombs, and more fund and resources are needed, it does indicate that the Belt and Road cooperation could “make a substantial impact.”

January 3, 2022 marked one month of operation for the China-Laos railway. Both passenger and freight transport has flourished.

According to statistics from China Railway Kunming Bureau Group, as of December 31, 2021, the China-Laos Railway had completed 380 freight train services with 150,000 tons of cargo in total. The imports mainly include natural rubber, iron ore and chemical fertilizers, and the exports mainly vegetables, fruits and electromechanical products. In addition, the Chinese section of the railway has handled 580,000 passengers.

As of December 20, a total of 22,000 passengers had travelled on the Lao section of the railway. Every day, many Lao people buy tickets to experience the changes that the railway brings to their work and life, expressing their love and support for the railway with their actions.

According to Vientiane Times, during the train ride, the reporter noticed that many passengers placed a paper cup almost full of water on the small table in the train, and not even a drop was spilled. They would use their mobile phones to take videos of the cup while saying “ka ka ka” (The spoken language of Lao, meaning very good).

The Regional Comprehensive Economic Partnership Agreement (RCEP), which came into force on January 1st this year, is of great significance for further promoting intra-region free trade, and the China-Laos railway will also play a greater role in this regard, said Bounleuth Luangpaseuth, Vice President of the Lao National Chamber of Commerce and Industry, in an exclusive interview with Xinhua News Agency of China recently.

But even though the railway is an unassailable and win-win project, Western smears are never absent.

In Laos, the US dropped 2 million tons of bombs and China built 1,035 km of railways. Yet the US media smears China, claiming that the China-Laos railway is leaving Laos in a debt trap and even worrying that Laos will become increasingly economically dependent on China, and eventually politically tied with China.

On the day China-Laos Railway opened to traffic, Tom Fowdy, a British analyst of politics and international relations, told the truth. He said that the Western media is sending a strange message:“the country that bombed you is your friend while the one that built your new railway is your enemy.”

Fowdy says, this argument is as insulting as it is outright insensitive to Laos’ contemporary history. Anyone who knows anything about Laos’ relatively recent past will be well aware that China is not the country to fear, but the United States. “It was the United States that dropped cluster bombs on Laos. As a result, in constructing the new railway, workers first had to clear the unexploded ordnance. How is it that the world and the mainstream media remain indifferent to this atrocity? And how, by any stretch of the imagination, can they claim that China is the true threat to Laos, and that the US and its allies act in the true interests of the country?”

China helped Laos build a railway that will bring huge economic benefits, which, however, is described by the West as an “evil and sinister railway,” while the fact that the US dropped hundreds of millions of bombs is “forgotten.” Fowdy suggests that the China-Laos railway provides a textbook example of how the media can distort a story in order to fortify an incriminating narrative, while brushing aside brutal realities.

On Dec 21, 2021, Chinese Foreign Ministry spokesman Zhao Lijian responded to a query at the regular press conference, saying that “the China-Laos railway is a flagship project of the two countries’ mutually-beneficial cooperation and Belt and Road cooperation. For over half a month since it started operation, tangible progress has already been achieved.”

In an interview, Prime Minister Phankham Viphavanh of Laos also rebuked smears targeting the China-Laos railway and dismissed the allegation that the railway has led Laos into a debt trap as pure slander, saying the railway meets the development needs of the Lao people and will deliver greater benefits to them by giving a strong boost to personnel and trade exchange. Chinese Spokesman Zhao Lijian quoted him by saying:“ the China-Laos railway meets the development needs of Laos. Laos is endowed with rich natural resources and has enormous potential for development. The main impediment at the moment is inconvenient transportation with the outside world due to its geographical location as a landlocked country. As a Chinese saying goes, good wine with an enticing aroma may still be known even hidden deep in an alley. The China-Laos Railway aims to reach this deep alley, help Laos realize the strategy of turning itself from a landlocked country into a land-connected one, invigorate its growth, bring it closer to the world, and enable people to not only smell the “aroma” but also taste the “fine wine” produced by Laos,”