China glad on extensive support in Pakistan for CPEC 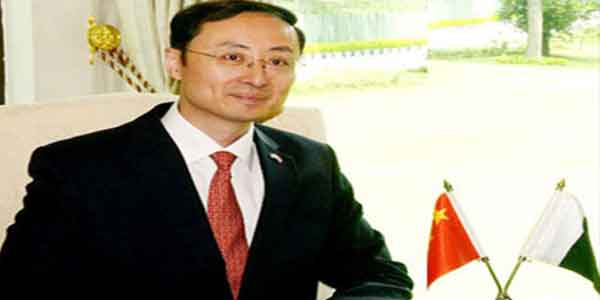 Chinese Ambassador to Pakistan Sun Weidong has said that his country is glad that the CPEC has won extensive support of people from all walks of life in Pakistan.

“The construction of CPEC requires scientific planning, step-by-step approach, mutual consultation and consensus, so as to achieve mutual benefit and win-win cooperation. We should create a safe and sound environment for CPEC and promote the construction of CPEC with new progress,” the ambassador said, while addressing Pakistan-China Business Friendship Conference.

The conference, he said, was a testimony to the great importance attached by the Pakistani government to promote bilateral relations, in particular the economic and trade cooperation.

He said the Chinese People’s Association for Friendship with Foreign Countries organized Chinese entrepreneurs from all circles to visit Pakistan to exchange views, enhance friendship and explore business opportunities with their Pakistani counterparts, so as to help set up a platform for business cooperation.

He thanked Ambassador Sha Zukang who took the initiative, arranged the visit and made great contribution to the friendly cooperation between China and Pakistan. The Chinese entrepreneurs are from architecture, environmental protection, machinery, metallurgy, steel, electro-optical, information technology and other fields.

Ambassador Sun Weidong noted that the year 2015 was a year of milestone importance to the China-Pakistan relations. It was also a year full of fruitful outcomes of China-Pakistan friendly cooperation.

He said last April, President Xi Jinping paid a successful visit to Pakistan. Both sides agreed to uplift the bilateral relationship to the all-weather strategic cooperative partnership. It ushered in a new chapter of China-Pakistan relations.

The year 2015 was also the Year of China-Pakistan Friendly Exchanges. They held a series of exchange programmes in various fields and made remarkable achievements, he added.

He said the year 2016 was also the year marking the 65th anniversary of the establishment of diplomatic relations between China and Pakistan. China would like to work closely with Pakistan to make further progress and promote the bilateral relations and cooperation to a new height.

“With the joint efforts of both sides, our bilateral economic and trade cooperation has made remarkable progress. China has advantages in technology, capital, production capacity, and Pakistan is rich in natural and human resources with huge market access.”

The ambassador further said, “We have deep-rooted friendship, highly complementary economies and extensive support from our two peoples, which provide our bilateral economic and trade cooperation with great potentials and brilliant future. Since China and Pakistan signed Free Trade Agreement in 2007, bilateral trade volume has increased rapidly.

“China has become the largest trading partner to Pakistan during fiscal year 2014-2015. Bilateral trade volume amounted to 17 billion US dollars during the period from January to November 2015, an increase of 19% compared to the same period of last year. Since fiscal year 2013- 2014, China’s direct investment in Pakistan has been on the top among all the foreign countries for two consecutive years. “Chinese investment stock in Pakistan has reached more than 3.6 billion US dollars. Pakistan is China’s largest investment destination in South Asia. These facts and data show the increasing confidence of Chinese business community in the economic development and investing in Pakistan.

He said the China-Pakistan Economic Corridor (CPEC) was an important and pilot project under the Road and Belt Initiative, and provided an important cooperation platform for business communities of both the countries.

He said the CPEC had gradually entered the stage of full implementation. A number of CPEC projects were under smooth implementation in general. The CPEC, he added, “faces Pakistan as a whole, covers various fields of cooperation and will deliver benefits to the people of Pakistan as well as the region.”

The ambassador said entrepreneurs were the backbone of China-Pakistan economic and trade cooperation. “This Pakistan-China Business Friendship Conference is the first function of the Chinese friendly exchange delegation in Pakistan and a prelude to the bilateral entrepreneurial exchanges and cooperation this year.

The Chinese government has always encouraged the Chinese enterprises with credibility and strength to invest in Pakistan. I sincerely hope that entrepreneurs of both countries achieve tangible outcomes by learning from each other, striving for innovation and jointly exploring business opportunities. I believe the Conference will definitely bring fresh impetus to the bilateral economic and trade exchanges and investment cooperation between our two countries.”