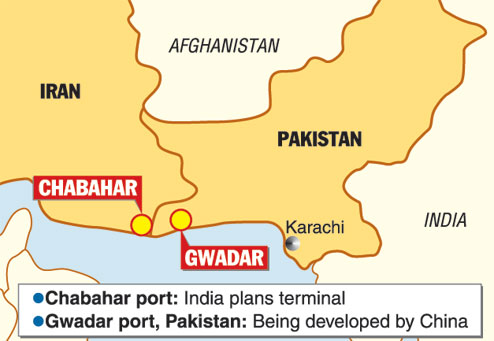 What a coincidence of history that Alexander the Great 2500 years ago followed roughly the China-Pakistan Economic Corridor (CPEC) down the Indus before marching west along the coast to Tiz (later renamed Tis), an ancient port between Chahbahar and Gwadar. The recent tripartite India-Iran-Afghanistan transit trade agreement envisages Chahbahar countering CPEC’s being an alternative to transit through Pakistan. Venomously jealous of the CPEC’s game-changing economic and geo-political potential, India and Afghanistan celebrated the by-passing (and by inference isolating) Pakistan with great fanfare and undisguised glee. Iran instead declared the ports to be complementary.

India spent $100 million constructing a 220-km road in Afghanistan’s Nimroz province to Zaranj near Zahedan. Indian goods will move on the 500-km rail tracks to be built by Indian Railways to Zahedan. Roads already exist from Chahbahar to Milak (950 kms) on the Iran-Afghan border, Zahedan (700 kms) in the Pak-Iran adjacent to Afghan border with Mashhad (950 kms) and Sarakhs (1827 kms) on Iran’s tri-junction with Turkmenistan and Afghanistan.

India-Afghanistan trade through Iran could increase to $3 billion from $700-800 million with Afghanistan substantially building up the trade deficit with India. Trade with Iran is expected to grow exponentially to USD 683 million in 2013-14. Even though hundreds of containers still enter Afghanistan through Chaman and Torkham border crossings, from only 30,182 Afghan containers passing through Iran to Afghanistan in 2008-09, the volume has more than doubled to around 80,000 in 2013-14, indicating continuing diversion of cargo.

Gwadar’s deep sea port is presently handling one million tons annually, with berths being rapidly added the capacity is increasing manifold. Spending around $18 million daily on import of 6.3 million barrels of oil from the Middle East, shipment costs are significant. The Kashgar-Gwadar CPEC lessens the maritime route for China by around 10,000-km via the Straits of Malacca and cuts costs significantly by one-thirds. For only 50% of its current oil imports, China will save around $6 million daily, approximately $2 billion every year.

Improving Pakistan’s infrastructure enormously the CPEC will generate significant transit fees, providing jobs to hundreds of thousands of Pakistanis. The first phase’s completion by 2017 comprises 3,000-km network of roads, railways and oil and gas pipelines from Gwadar port to Kashgar. CPEC’s western route would be completed by 2018. Despite the transit trade passing, Afghanistan keeps complaining about costs and delays, China’s paying of transit fees will substantially increase Pakistan’s revenues without facing any trust deficit. Increased availability of trucking space for importers and exporters in Pakistan will bring down the freight charges by 50%, making imports cheaper and exports more competitive.

Despite its constant unfriendly attitude, the Afghan government formally requested Pakistan a four-year extension to legalise the stay of 1.5 million registered Afghan (and by inference 1.6 million unregistered) refugees till 2020. The refugees continue to be a heavy burden on Pakistan’s economy. Can Afghanistan’s favoured friend India give at least symbolic succour to 30,000-60,000 refugees, ie, 1-2% only? The lessening of Afghan presence in Pakistan will reduce the “Kalashnikov and drug culture” unknown to Pakistan before 1979 till their import from Afghanistan. Other than large financial outlays annually, reimbursed partially by international donors and agencies, consider the pressure on our socio-economic sector, particularly higher education and medical facilities where Afghans are given priority seats deprive deserving Pakistanis of space. Continuing to bear the pain and sorrow because of violence, disappointment is turning to anger at the rank Afghan ingratitude. While not paying any transit fees, Afghanistan criticises our refusal to allow trade of Indian goods via the road link. The Afghan Pakistan Transit Trade Agreement (APTTA) causes smuggling of goods with commensurate revenues lost (almost US $2 billion) as well as increased internal freight costs, our only benefit being an export surplus with Afghanistan. Pakistani goods have limited access to Central Asian Republics (CARs) through Afghanistan, and that only on payment of transit fees in advance and keeping 110% of cost of exports until final clearance of border with the land-locked CARs. The transit trade agreement must give Pakistan trucks reciprocal access to CARs without payment of duty and taxes.

Once the emotional dust created by the Indian hype over “by-passing and isolating” Pakistan settles down, the Chahbahar agreement in the cold light of day is not a threat but a blessing for Pakistan in Indian disguise. While Indo-Pak relations will remain complicated until India accepts our existence as a Muslim nation or “Balkanize” us as done with Bangladesh, we should be thankful to India for taking away from us partly the transit load to Afghanistan, even though their motives were quite substantially different. As a huge partner of GCC countries, far bigger than India, China’s trade will be handled by Gwadar. Chahbahar frees Pakistan’s logistical space, the Chinese paying for what is used free by Afghanistan without any gratitude whatsoever. With free trade zones and only 72 kms to be inter-connected by road and rail, Chahbahar and Gwadar are complementary instead of being in competition. On the other hand Gulf ports Dubai, Abu Dhabi, etc are in serious danger of competition from these two ports on the Asian land mass, particularly from Chahbahar once into full operation. As mega cities with all commensurate facilities they will devalue Dubai’s importance.

Thanks to India’s unrelenting hatred for Pakistan, the lifting of Afghanistan’s yoke from our neck has coincided at the right time for Gwadar to fulfil its CPEC destiny. To quote Robert D. Kaplan, “If we can think of great place-names of the past-Carthage, Thebes, Troy, Samarkand, Angkor Wat-and of the present-Dubai, Singapore, Tehran, Beijing, Washington-then Gwadar should qualify as a great place-name of the future.”