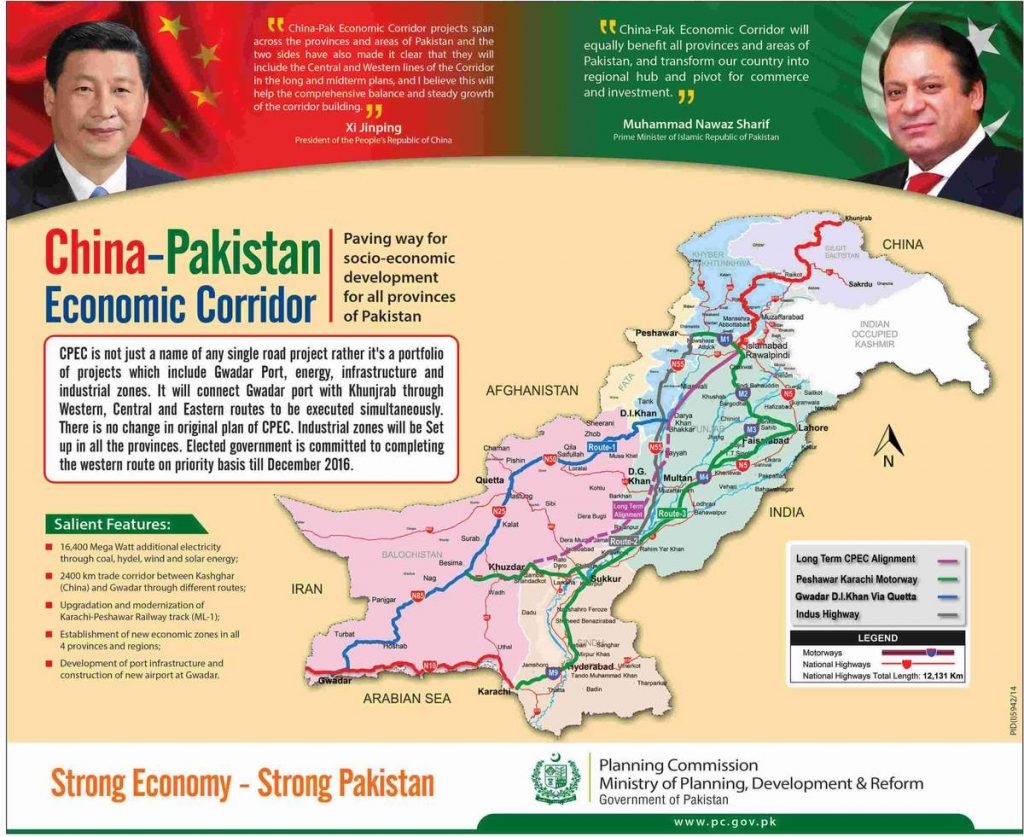 Chinese diplomat Zhao Lijian, gave a free and frank yet an enlightening presentation on the introduction of the CPEC at the Institute of Strategic Studies Islamabad on 14 July. His approach was critical like a university professor unlike giving a government-sponsored viewpoint.

The presentation turned to be the most authentic, crystal clear, and a candied view on the multi-billion dollar China-Pakistan Economic Corridor (CPEC). He attempted to clarify doubts, misperceptions, and confusions surrounded the mega pilot project of the One Belt One Road (OBOR).

The project was formally conceived in May 2013 when Premier Li Keqiang officially visited Pakistan on 22-23 May 2013 during the Caretaker Government. Later, Prime Minister Nawaz Sharif made visits to China to discuss the importance of this mega project.

During his first visit taken in July 2013, a Joint Cooperation Committee (JCC) was established to discuss modalities of a number of projects by both sides in China and Pakistan. So far the JCC met five times and made important decisions about the CPEC projects and made four working Groups on long-term planning, energy, transport, and Gwadar Port.

Prime Minister Sharif again visited Beijing in November 2013 to further discuss CPEC projects. President Xi Jinping visited Pakistan in April 2015 and formally announced China’s offer of US$ 46 billion and as many as 51 MoUs and agreements were inked giving importance to energy projects to meet the shortage of energy in Pakistan. They will be completed by 2018-2010.

There was no so-called “original route” as talked by politicians. Many routes came under discussions from time to time and looking at their feasibility and significance, they were discussed. There is no straight road but a corridor with multiple passages and a network of roads and railways to be built over the years step by step looking at the importance and need.

The Government decided to build the Western route on priority basis to bring about the socio-economic change. Politicising of roads and its network is not in the interest of Pakistan. Politicians must avoid this controversy. They should patiently wait to see the benefits of the CPEC projects reaching down to common masses. It is like a chicken-egg policy. It goes step by step.

The guiding principles of the CPEC are: scientific research and planning, step by step approach, consensus, mutual win-win, and market operation. Exact data of investment and equity are not possible to state at this time in point as dozen of projects sought financial close and many more are in the pipeline and this process will continue.

A number of companies, Chinese and non-Chinese, and countries are allowed to participate in these projects in an open and international bidding in a transparent manner. Japanese, South Korean, Singaporean, Malaysian, Arabian, Iranian, Russian, American, European, Central Asian, and Australian companies are encouraged to participate in these projects.

They could acquire concessional and soft loans from Chinese Exim Bank and through other channels. Opportunities are vast and beyond their imagination. The CPEC is building a regional economy and benefits will pass beyond its shores and mountains.

The Gwadar smart city has a number projects ranging from primary school to an international airport and industrial zone that would change the fate of Balochistan as multiple passages will be built to well connect this vast province. Gwadar projects will also solve its water issue by installing desalination plants as well as sewage plants.

Besides Balochistan and building highway all over the country from Peshawar to Karachi, CPEC is a game-changer for Gilgit-Baltistan. The Korakoram Highway (KKH) is under the process of up-graduation. There are a number of railway projects linking Havalian to Kashgar. Most of them are underway.

As a whole, CPEC projects are changing the face of Pakistan’s economy. Such a huge investment never happened in Pakistan’s accumulative FDI history since 1950. The CPEC investments amount to 10 percent of Pakistan’s total GDP at present value. A miracle is in the making on the Indus River.

The writer is a Senior Research fellow at the Institute of strategic Studies Islamabad. He is an expert on Japan, China, and East Asian affairs.