‘Academics can prepare people for CPEC’ 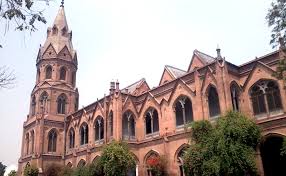 LAHORE: The China-Pakistan Economic Corridor (CPEC) will have a significant impact on the society and culture of both countries. The academia should play a role in preparing the people of both regions for these changes, Government College University Vice Chancellor Hassan Amir Shah said on Monday.

He was speaking at a ceremony to sign a memorandum of understanding on student exchange between the GCU and the China University of Geosciences, Wuhana (CUG).

Under the MoU, 20 CUG students will participate in the annual summer school at the GCU’s Centre for Excellence in Chinese Studies (CECS). The visiting students will study courses on Pakistan Studies, English Language, Pakistan-China Relations among other subjects. Six GCU students will visit the CUG where they will remain in residence for a month and study courses on Chinese language, culture and economic system. The MoU states that the CUG would assist two GCU students in getting admitted to its masters of sciences (MS) or masters of philosophy (MPhil) degree programmes every year under the China Scholarship Council.

The MoU was signed by the GCU VC and CUG Institute of Environment and Conservation Law (IECL) Director Huang Delin.

CECS Director Khalid Maznoor Butt said that the geosciences department at the CUG was among the best in China. He said GCU students should benefit from the opportunity to visit the university and study at the department. He said the CECS was supporting research of several students on Chinese culture, history, political and economic system.

Butt said the MoU featured cultural and sports exchange programmes. He said students affiliated with the GCU’s Dramatics Club and Music Society would visit China to perform at cultural events.