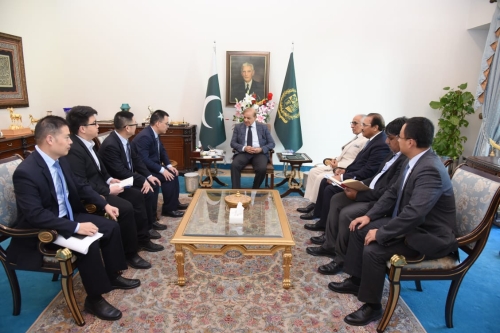 The project leader of Qasim and the country representative of POWERCHINA in Pakistan paid a visit to Pakistani Prime Minister Shabazz Sharif on October 21, 2022, and presented a donation of $104,000 to the fund for flood relief and disaster relief. comprehensive communication

When Pakistan was experiencing severe flooding, POWERCHINA quickly offered a helping hand, according to Shabazz Sharif, who also praised POWERCHINA for its gift and assistance. Pakistan has been experiencing nonstop heavy rains since June of this year, which have caused major floods and waterlogging. This calamity has caused millions of people to be relocated as well as thousands of deaths. The Pakistani economy has suffered a significant hit as a result of the economic loss, which exceeds 10 billion US dollars. While putting up every effort to combat the flood and provide disaster aid, we are also pleading with the general public and the international community for help.

Together with the “Brazil Railway” brothers, POWERCHINA’s businesses in Pakistan have conquered challenges by contributing money, fixing roads and agricultural infrastructure, and providing aid to local workers who have been harmed by disasters. More than 2.7 million rupees (about 9 10,000 RMB) have been provided voluntarily by Chinese workers in Pakistan, and many Power Construction coworkers who have worked there have also made financial contributions to Pakistan through other methods. POWERCHINA gave an additional US$104,000 (or 750,000 RMB) to the Prime Minister’s Office Flood Relief Fund in response to the Pakistani government’s request, firmly assisting the “Pakistan Railway” brothers in overcoming the challenges and rebuilding their houses.

Since the start of the pandemic, the POWERCHINA-backed Qasim project has donated to Pakistani government organizations several times. In March of this year, it contributed 10 million rupees to the social responsibility fund set up by the Pakistan Electric Power Regulatory Authority (NEPRA) ( approximately RMB 350,000). (Li Pengfei and Song Rui)