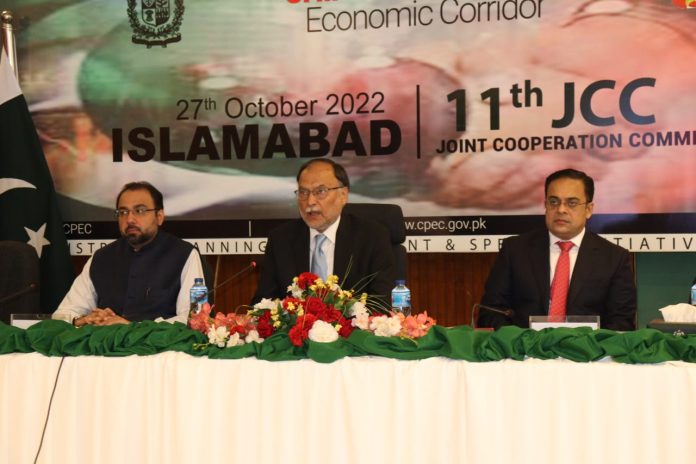 The recommendations were brought forward at the videoconference 11th Joint Cooperation Committee (JCC) of the CPEC meeting.

On November 1, when Prime Minister Shehbaz Sharif visits China, it is anticipated that the Memorandum of Understandings (MoU) on the planned areas would be signed, the Minister for Planning, Development, and Special Initiatives Ahsan Iqbal stated during a news conference held today.

According to him, the CPEC has become the Pakistan-China All-Weather Strategic Cooperative Partnership’s top national priority under the direction of Prime Minister Shahbaz Sharif.

In the 11th JCC, the Minister emphasized three key goals, one of which was to revive CPEC, which has been resurrected since the government took office in April of this year.

The addition of additional projects that would broaden the CPEC’s portfolio and thirdly, business-to-business collaboration, which was before dependent on government-to-government, were both important.

The JCC also emphasized the importance of the major infrastructure and energy development projects, which are now functioning and offering a wide range of prospects for Pakistan’s socioeconomic development.

The Peshawar-Karachi Motorway (Multan-Sukkur Section), the Hakla-D.I. Khan Motorway, and the Orange Line Metro Train – Lahore are similar infrastructure projects that have been completed.

The Ministry of Energy informed the audience that 11 projects totaling more than 6370 MW had been finished, as well as an 880 km HVDC Transmission Line. Within 2023–2024, three further projects totaling around 1200 MW are anticipated to be finished.

Additionally, it was disclosed that another 3100 MW, including the 700 MW Azad Pattan HPP, the 1124 MW Kohala Hydel Project, and the 1320 MW Thar Coal Block-I, which have reached 90% FC milestones, are being concluded as soon as possible to help us come closer to our objective of 17000 MW.

The 888 km long investment in motorways and highways that was financed by both Chinese and domestic sources was also emphasized (another 853 under construction through local financing). One of the sector’s showpiece projects, the KKH-Thakot-Havelian, has won praise from throughout the world.

The Karachi Circular Railway (KCR), another important project that would assist a significant portion of Karachi’s population, was also extensively addressed. Karachi is Pakistan’s largest metropolis.

The project documentation has been amended by the Provincial Government of Sindh, and internal processing by the GOP is now being finished. It is suggested that the project be carried out as part of a G2G configuration along the lines of the Lahore Orange Line Metro Train Project (OLMTP).

“We have fulfilled all the formalities to initiate this project as Cabinet also approved it,” said the minister, while highlighting the significance of the project which will have a great positive impact on Pakistan’s economy.

Both sides have also agreed to start the ML-1 project which was considered to be the backbone of the CPEC and remained neglected in the past. It was agreed to include a new area of “Water Resource Management and Climate Change which will have great importance, especially after the recent flood which badly affected Pakistan.

Similarly, both sides have agreed to explore new avenues in the Mining sector and it was decided to set up a new working group to explore the sector.

The Cooperation in the Agriculture sector was also discussed in length in the 11th JCC, which is one of the essential elements of the second phase of CPEC.

Pakistan has finalized some agreements to promote the export of Pakistani agricultural items to China which needs to substantially enhance the scope and scale of these products. The Ministry of National Food Security has proposed an MoU on Cooperation in Plant & Animal Quarantine and Phytosanitary Measures, which will help pave the way for the exports of meat, vegetables, and fruits to China. It is an important initiative and needs to be finalized urgently.

Similarly, the framework Agreement on Single Window Cooperation in inland Trade was also Proposed. Pakistan also proposed a mechanism for a new area of Water Resources Management and Climate Change in the CPEC framework, considering the enhanced vulnerability of Pakistan to climate events.

Pakistan also assured Chinese counterparts to continue to beef up the security of Chinese working under CPCE projects and in this regard, several initiatives have been taken. Both sides have agreed to expand their cooperation in Information Technology and it was decided that Chinese companies will establish research centers in Pakistan to explore new avenues in this sector.

The Minster hoped that today’s deliberations in the 11th JCC would give a new impetus to CPEC and it will begin a new era, leaving behind the legacy of the Covid period, which has affected our ability to have face-to-face meetings resulting in restricted interactions and consultations.

“The decisions we take today will go a long way in furthering the aims of the CPEC which has regained the same momentum as during 2013-18,” the minister concluded.